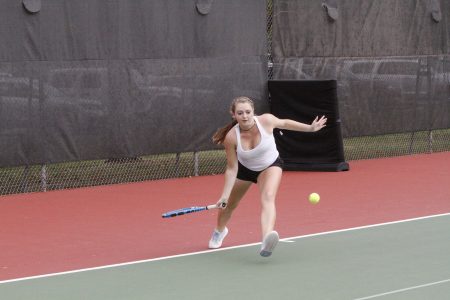 Free State junior Keegan VanPelt reaches to return a point in the semifinals of the 6A girls state tennis tournament on Saturday, Oct. 19.

Coming off a fifth-place finish at the 2018 Class 6A state girls tennis tournament, Free State junior Keegan VanPelt felt confident in how much she could improve in the offseason.

“I noticed that (state is) really hard and that I have to keep working,” VanPelt said. “And I put in the work this (past) summer and earlier this year and it all pays off.”

And as she had hoped going into the 2019 Class 6A state tournament, VanPelt improved to a fourth-place finish Saturday at Kossover Tennis Center in Topeka.

“After that fifth-place finish last year, I know she was happy, but I don’t think she was satisfied,” Free State coach Aaron Clark said. “And everything she did between last year’s tournament and this year’s tournament kind of led to ‘hey, all of a sudden you’re finishing fourth instead of fifth.

“And you had a chance to finish even higher.'”

After looking at the state tournament bracket before play began Friday, VanPelt had a feeling she could go far once again this year. VanPelt went 3-0 on Friday, with a key win over Blue Valley West’s Gwyn Gifford (6-2, 6-2) putting her in the semifinals Saturday.

“I mean, I had a tough quarterfinal (matchup) against Gwyn, which I knew would be tough,” VanPelt said. “I also knew if I got past that, it was going to be tougher as I went on.”

And VanPelt was right, as her next opponent was Callie Flanagan from Blue Valley North, who has won two state titles on the doubles side.

However, VanPelt was the one who struck first as she took the first set 6-4.

“I just knew that I was the underdog in that one, so it put less pressure on me and that I was just going to work hard,” VanPelt said. “I competed the best that I could and I tried as hard as I could, taking one point at a time.”

But after that initial setback, Flanagan took back control of the match, winning the second set 6-3 and the decisive third set 6-1.

“I was just happy I got as close as I did,” VanPelt said. “I wish it turned out a different way, but it’s alright.”

While VanPelt wished she could’ve maintained her stamina throughout the semifinal match, both Clark and Van Pelt were proud of her effort.

“She played really well against Callie,” Clark said. “That certainly, we hoped, would kind of help her in her third-place match. But she just ran into a really good player there.”

And the third place match showed she was a bit worn down when she faced off with Manhattan freshman Jillian Harkin, who won the match 6-0, 6-3.

“It was definitely not my day in that match,” VanPelt said. “She’s a really good player, so I have to give her a lot of credit.”

“It’s always kind of in the back of my head, but I have to forget about it because that shouldn’t affect the way that I play,” VanPelt said. “I’ve just got to forget it, otherwise it’s going to make me even weaker.”

On top of that, Harkin’s ability to extend points and use 20 to 30 shots to score a single point turned the tide in the last match.

“And Keegan has that same mentality,” Clark said. “As many balls as it takes to get one point, that’s what she’s willing to do. That’s why she had the success she had this year.”

And while neither of Saturday’s matches went her way, VanPelt’s self-determination and “high tennis IQ,” Clark said, helped bring her through these tough battles on the court.

“Sometimes with these tournaments, you’ve got people walking around, cheering at other matches,” Clark said. “It requires a lot of mental focus.”

VanPelt credits her offseason work, her coaches and her tough opponents for her success this season.

“I’m really proud of myself,” VanPelt said. “I mean, that’s All-State honors, which I did last year. I’ve worked really hard and I feel like I had some good wins (at state).”

“There’s not much room to move up, so she’s really got to step her game up,” Clark said. “Just the kind of player she is, I’m sure she’ll do what she needs (to do) to get back to that stage next year.”