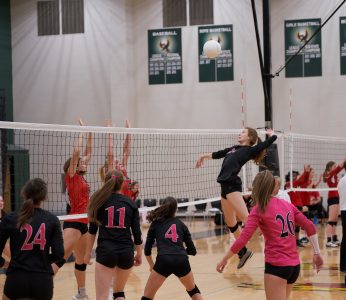 Free State Haylee Kern (14) gets in position to spike the ball against Lawrence High on Tuesday, Oct. 8, 2019, at FSHS.

Free State’s volleyball team has known since last Thursday, but it waited until the end of Sunflower League play to officially say anything about it.

On Tuesday, FSHS volleyball posted a team picture on social media to announce that it had won the Sunflower League title. The Firebirds, who are coached by first-year head coach Jayme Savage, ultimately shared the league crown with Gardner Edgerton.

Free State went 11-1 against Sunflower League foes, claiming its first such title since 2017.

“It proves what hard work and chemistry can do for a program and a team,” Savage said. “We have worked very hard on establishing a strong team culture and a strong team dynamic. Once you have the mental side of it down, the physical side has always been there. It just meant a lot for this program.”

But there are a multitude of reasons why FSHS, which went 10-2 in league play last year, is atop the Sunflower League standings once again.

For starters, players have bought into a culture change with Savage at the helm. For proof of that, look no further than how the Firebirds did in the Sunflower League tournament at all levels this past weekend. The junior varsity squad finished as a runner-up, while both the c-team and freshman squad notched third.

At the varsity level, the chemistry has also been evident over the course of a 12-match league slate. The Firebirds have a cohesive group behind a nine-player senior class of Morgan Beer, Cameryn Ekeler, Haley Hippe, Haylee Kern, Emily Arensberg, Mya Gleason, Emily Jones, Sydney Johnston and Kaitlyn Hamilton.

“We are all very close, we are like a family,” Hippe said. “I think it is very important to have a good team chemistry to be good on the court as well. You want to play for each other and you want to win for each other.”

Most of all, though, Free State players are more prepared than ever before ahead of each match.

The Firebirds (18-9, No. 10 in Class 6A) utilize an online platform, Hudl, to watch film and read scouting reports. It is a system that Free State has used in the past, but the players have really emphasized the importance of doing their homework this fall.

Savage will upload tape and key info on an opposing team, and players have the choice to view those things in their free time.

“It is really helpful because it gives us stats on the other teams,” Hamilton said. “We all just realized how important those matches were, so we put a lot of effort into looking at film of other teams in the league.”

It has been helpful for self-scouting purposes, too. There is a function to show where players tend to hit the ball. It is one of the many features that ultimately help the Firebirds have a better understanding of what they are good at and what they need to work on.

The numbers would suggest that Free State has a balanced attack. Hamilton, an Indiana State commit, leads the team with 162 kills in 49 sets. Freshman Aubrey Duncan and Jones have recorded 118 and 94 kills, respectively.

Freshman Rylee Unruh leads the team with 19 aces, though Gleason (17) and Arensberg (13) have double-digit aces as well. Duncan paces the Firebirds with 58 blocks, but Hippe has tallied 39 blocks. Gleason is leading the way with 207 assists, while Arensberg has 197 on the year.

“It means a lot to start off strong with a new coach,” Hamilton said. “It was a really good start for the program.”

The trick for the Firebirds will be carrying that momentum into the postseason. Free State has a tournament in Emporia this weekend and one more road match before turning its full attention to sub-state next weekend.

“The key is to stay focused and to stay disciplined,” Savage said. “We have to keep in mind what’s at stake and what we have to do to get the job done.”

Lawrence will compete in a tournament at Emporia on Saturday.