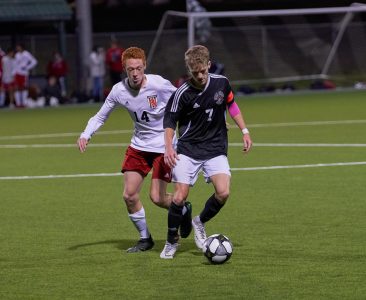 As soon as the final whistle blew at the end of the second overtime, it was clear both Free State and Lawrence High were gassed.

“We had a couple (players) that started that came up with some cramps, so we needed people to step up off the bench, which they did,” Free State senior forward Ashton Owen said. “But (it was) just a hard-fought game.”

And after 100 minutes of scoreless soccer, Free State and LHS ended in a scoreless 0-0 draw Tuesday night in the City Showdown.

Owen said LHS played very well, but the Firebirds expected a bit of an easier time getting a result.

“But it’s a rivalry game, so it’s a little more on the line of just winning the game and bragging rights,” Owen said. “We couldn’t really finish our chances.”

For LHS, potential bragging rights over its crosstown rival also helped push the Lions through a grueling match.

“Go out, go hard,” LHS junior forward Mason Anderson said. “But I guess this one stays with both of us until next year.”

Prior to extra time, the match had multiple opportunities to end in regulation with close chances for both sides. LHS junior midfielder Alex Culbertson sent a shot just off the left post in the 66th minute. Less than three minutes later, Free State sophomore forward Joon Chun — who had just come in as a substitution — sent a shot off the crossbar.

Both Anderson and Owen also had long runs of their own into the other team’s final third, yet no shot found the back of the net for one reason or another.

Owen’s closest chance came off a corner kick in the first overtime period. He tried a back heel toward the net, but LHS sophomore goalkeeper Grant Glasgow was in the right place to get the save.

“I flicked it with my foot and I was surprised the goalie got it,” Owen said. “But things happen.”

One key contributor to the scoreless draw was the physicality of the match, with multiple players falling down due to injury, cramping or just the rough nature of play.

Owen added that the physicality comes from how long these players on both sides have competed with and against each other.

“We’ve (known) these kids and been playing club (soccer) with them for probably 10 years,” Owen said. “So it’s just a little fun to give a little shove and (play physical).

“We want to win, obviously, so you go all out.”

But adding the physicality of a rivalry game to a 100-minute match takes a certain mentality, according to Anderson.

“You’ve got to stay mentally tough,” Anderson said. “You get real tired, you get worn down, but you’ve got to have faith in your team’s abilities. And you’ve got to keep pushing.”

Although Anderson — who had multiple deep runs of his own throughout the match — and the Lions didn’t get the result they hoped for, Anderson still was proud of his team’s “10 out of 10” effort.

“They fought hard,” Anderson said. “This is the best group of guys to play soccer with because they put their heart and soul into this team, day in and day out.”

For the Firebirds, Owen said they need to stay focused on the long week ahead.

“We just need to look forward,” Owen said. “We have senior night Thursday, then we go to Dodge City Friday and Saturday. (We’re going) to need water, ice, get ready.”