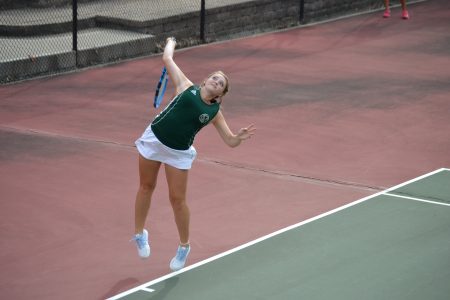 Free State's Keegan VanPelt serves a ball during a match Tuesday afternoon at LHS on Sept. 10, 2019.

Free State’s girls tennis team will be sending three athletes to the Class 6A state tournament.

One singles player and one doubles team qualified for the final meet of the year for the Firebirds after a strong showing at regionals. FSHS claimed second place as a team Saturday afternoon at Harmon Park Tennis Complex.

Anna Peard and Taylor Veeder punched their ticket to the state tournament in the doubles bracket. The Firebird duo went 2-2 on the day, securing a sixth-place finish to advance in the postseason.

Lawrence High’s Lilli Derby just missed out on qualifying for the state tennis tournament. She went 1-2 in the singles bracket, dropping a match in the consolation bracket that would have advanced her to the fifth-place match.

The 6A state tennis tournament will begin at 10:30 a.m. Friday at Kossover Tennis Center in Topeka.

Junior Bruce Xu scored the lone goal for the Seahawks. BSA was without starters Julian Almon and Cameren Green in the win. Despite a depleted roster, the Seahawks have now won two of their last three matches.

Athletes of the week

It has been an incredible season for Tonganoxie running back Cooper Cunningham.

The THS senior has already accumulated 1,260 yards and 10 touchdowns on 146 carries through six games. The Chieftains are undefeated behind his efforts as a featured back with two weeks left in the regular season.

Cunningham has run for at least 210 yards in five of his six outings, including his previous four games. In a 41-0 win over Spring Hill last week, Cunningham piled up 220 yards and one score on 18 attempts.

After a breakout season last year, Paris Spotted Tail has been even better in her sophomore campaign.

Spotted Tail has notched a top-two finish in the all-around rankings in three of her previous four meets. Spotted Tail claimed a runner-up finish in Monday’s meet at LHS, while notching the top spot in the Newton Invitational last weekend.

Junior Grady McCune, who is a two-time All-Frontier League selection, scored a pair of goals in Baldwin’s 5-0 win over KC Piper on Thursday.

McCune led the team with 10 scores last year during Baldwin’s run to a 12-5-2 record and becoming regional champions. This year’s squad is just as loaded, however. Baldwin is 9-4-1 on the year, and leading the Frontier League with a 7-1-1 clip.

Meadows notched fourth place on the individual leaderboard in the final leg of the Sunflower League, which took place Wednesday at Sycamore Ridge Golf Course. She shot a 79, and ultimately earned a second-team selection on the All-Sunflower League team.

The Firebirds will be back on the course in Monday’s regional meet at Lake Shawnee Golf Course.

One of the highlights of last week was Veritas’ comeback win over Bishop Seabury.

After dropping the first set, and facing match point multiple times in the second set, the Eagles stormed back to claim a 2-1 win over the Seahawks. Senior setter Emma Boulton was a big reason why, finishing with 20 assists and five kills in the win.