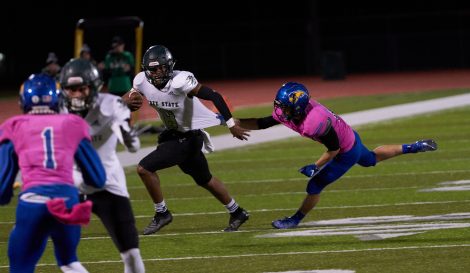 With temperatures in the low 40s on a frigid Friday night at Olathe District Activity Center, Free State bullied its way to a 28-7 win over Olathe South.

The Firebirds leaned on their ground game behind a solid showing from an offensive line that overcame multiple injuries, while the defense bottled up the Falcons’ rushing attack for much of the night. All in all, it was more than enough to lift Free State (5-1) to its fourth win in a row, including third consecutive road victory.

“I was really proud of a lot of guys that stepped in,” FSHS head coach Kevin Stewart said. “We had some injuries, and we had guys that had to step in with not as much experience. They did a great job. I thought our defense played lights out. Overall, very proud of the effort that we gave.”

But it was evident from the start that Free State was going to dictate the style of play in its latest Sunflower League affair.

Senior Lovette Epelle bursted through the line for a tackle-for-loss on the second play of the game. One drive later, seniors Joey Eddis and Devon Buck both came up with a sack to gift the offense with favorable field position.

Shortly after, junior running back Tyler Bowden bulldozed his way through the Olathe South defense for a 4-yard touchdown. He simply lowered shoulders, shoving off a would-be tackler to give the Firebirds an early advantage.

The Falcons responded one play later with a 65-yard touchdown run, though that proved to be their only sign of offense in the first half. Olathe South netted its lone first down of the first half at the 10:30 mark in the second quarter, which occurred on the fourth possession of the contest.

Buck, Epelle, Eddis, Tai Newhouse, Ben Miller and Gage Callaghan only allowed two first-half runs to go for more than 4 yards. Senior safety Colter Maldonado, who began the year as the team’s starting quarterback, came up to deliver multiple big hits as well. He also notched an interception on one of the few times that the Falcons went to the air.

Free State’s offense, meanwhile, did its best to eat up clock by relying on the run game. FSHS ran 16 more offensive plays than Olathe South in the first quarter alone, and that was the theme of the game.

However, that is when Free State faced a bit of adversity.

The Firebirds appeared to be marching on their next drive, when senior left tackle Turner Corcoran suffered an injury on a 17-yard run by Bowden at the 4:44 mark in the second period. The Nebraska commit went to the sideline and did not return to action.

On the previous possession, starting center Tyler Gourley was sidelined with an injury as well. The injuries on the offensive line disrupted Free State’s ability to move the ball, as it turned it over on downs on the final possession of the first half.

While the Firebirds moved the ball better in the second half, they struggled to finish off most of their drives in the second half. Bowden darted through the Olathe South defense for a 30-yard touchdown run early in the fourth quarter, which featured several different spin moves.

“It hurts when you lose your left tackle and center,” Stewart said. “But we still had a lot of opportunities, but the thing was that we were dropping passes. A lot of holding penalties tonight, we have to clean that up. Overall, I was proud of the guys that stepped in and made it happen.”