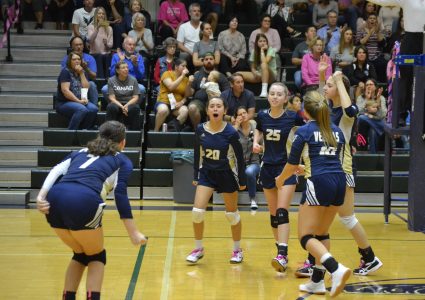 The Veritas volleyball team celebrates after a point during a match with Bishop Seabury Tuesday night at BSA on Oct. 8, 2019.

Even when the Veritas volleyball team was on the verge of losing, senior Emma Boulton wasn’t worried.

The Eagles were coming off a two-set loss (25-22, 25-14) to Kansas City East Christian Academy and had even dropped the first set (25-23) in the final match of the triangular against host Bishop Seabury. To make things worse, VHS was staring down defeat when trailing 24-22.

And that’s when it happened.

Veritas responded when it mattered most, finding a way to claw back to secure a 31-29 victory in the second set. The Eagles then claimed a 25-20 win in the third set to complete the come-from-behind victory.

“I was just like, ‘We got this,'” Boulton said of facing match point in the second set. “It feels awesome. I’m really glad that all of our hard work from practice paid off.”

Many players contributed to the impressive rally down the stretch, as the Eagles registered 11 kills in the second set alone. Raeleigh Heck delivered three kills to lead the way, though Boulton, Olivia Dreiling and Satchel Koch all had two kills as well. Boulton also paced the team with nine assists in the second set.

Veritas found a way to earn a hard-fought win in the second set, despite facing match point on five different occasions.

The momentum carried over into the third set, where Dreiling and Koch posted a pair of kills to keep the offense cruising. Megan Malm helped win 5 points, 4 of which came off aces. Lila Avila was also involved in a third set victory that didn’t need as much theatrics.

“That was really big for us,” VHS head coach Kristen Oberzan said. “To see those younger kids handle that kind of intensity.”

But Veritas’ resiliency is a testament to Oberzan, who is in her first year at the helm. Since she took over, the Eagles have been more focused on the mental aspect of the game.

That was evident when things got tough Tuesday night in an electric environment. Music was blaring during each timeout, and the crowd was roaring with each point during the thrilling three-set battle.

“That’s been something we really struggled with all season, just staying consistent,” Oberzan said. “We are really high and really low, so hopefully we able to play at a high level consistently for state.”

The narrow loss was also an important lesson for Bishop Seabury, especially with the postseason around the corner. BSA started the night off with a 2-0 win (25-17, 25-22) over Kansas City East.

The Seahawks now know they have to finish teams off. That being said, BSA didn’t go without a fight after faltering late in the second set. In fact, BSA battled to a 19-19 deadlock before Veritas scored 3 points to eventually pull away in the third set.

“It gives us a good feeling going into our game on Monday, especially sub-state,” Gabriella Aubel said. “Even though we did lose, we fought for those three sets. I think we really showed ourselves that we can fight really hard, especially under so much pressure.”

Aubel was the team’s lone senior player recognized during senior night, which took place before the third match. She started things off with an ace, and fueled the team’s offense for much of the night. Aubel finished with seven kills and five aces against VHS.

Reaghan Bible also registered several emphatic kills throughout the match, finishing with a team-high 10 in that category. Shea Hanna notched 12 digs and Gisele French paced the team with 19 assists.

“I think we did really well,” Aubel said. “I think in that second set we fought as hard as we could.”

Kanak Masten scored the lone goal for the Lions, who have now lost three consecutive matches. LHS has been outscored by a 6-3 margin over the previous three games, falling to 4-5-2 on the year.

The city gymnastics teams took the top-two spots in a quadrangular Monday night at LHS.

Free State claimed the top spot with a mark of 100.100, while Lawrence High finished in second out of four teams. The Firebirds have four athletes earn top-six finishes in the all-around rankings, led by Talia Gay taking the top spot on the individual leaderboard.

Paris Spotted-Tail secured second in the all-around rankings. She was first in vault and floor, while placing second in bars. Beth Brandt notched third in vault and sixth on the floor routine.

Bishop Seabury’s cross-country program has a few different medalists at the Barstow meet on Tuesday.

On the girls side, freshman Oona Nelson netted first with a personal-record time of 19:34. Senior Sabrina Eicher placed fifth with a mark of 22:09, which helped the Seahawks secure a runner-up finish as a team.

BSA sophomore Diego Klish placed seventh with a personal-best time of 18:44 in the varsity boys race.