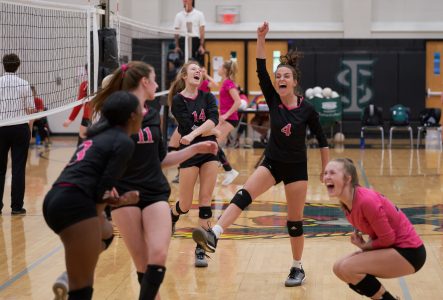 Free State's Mya Gleason (4) and her teammates celebrate their score against Lawrence High on Tuesday, Oct. 8, 2019, at FSHS.

Even before Tuesday’s match started, the energy inside the Free State gym was palpable. That energy propelled Free State volleyball to a 3-0 victory (25-17, 25-13, 25-20) over Lawrence High in the City Showdown.

“It definitely helped build a lot of momentum, especially when we went on long runs,” Free State senior Kaitlyn Hamilton said. “Just having that crowd there to back us up really helped push those runs to be even longer.”

It was also senior night for the Firebirds, making the night and end result even more special for Hamilton.

“Personally, I was a little choked up just because it’s been a really long run here,” Hamilton said.

“But I’m so glad that we’ve finally made it to the last match,” Hamilton said. “Last year, we had our indifferences but we’ve been able to get over that and overcome it. We all get along so (well) together and we’re able to bring the underclassmen together as well.”

Once the match started, though, it was LHS who came out swinging first, with the Lions jumping out to an early 5-1 lead in the first set.

“The mentality for us (came from) our coach (telling) us to swing hard and stay aggressive,” Lawrence High’s Asjah Harris said.

Free State came back, taking an 8-7 lead off a kill from Hamilton. The Firebirds would quickly take a 12-10 lead, which was enough of a momentum shift for Free State to hold on and take the first set.

“We definitely started getting more in the game mentally and physically,” Hamilton said. “I think in the beginning we let (LHS) get in our heads a little bit too much. So we were able to overcome that mental lapse and just play like we were used to.”

The second set started the same with LHS taking the first point once again, but Free State bounced back quickly to take an 8-1 lead. The Firebirds fully took control again in the middle of the set en route to the 25-13 set victory.

Hamilton said the Firebirds focused on getting off to a better start in the second set with more energy.

“So we just wanted to push every point and make the most of every point we had left,” Hamilton said.

Even with the Lions trailing 2-0, Harris in particular was still vocal on and off the court. She consistently reiterated the idea of swinging hard, staying aggressive and “playing our hardest until the very last point.”

“When you’re a senior it kind of all hits,” Harris said. “The leadership definitely is something you have to do as a senior. Being vocal and having energy on and off the court definitely helps.”

LHS did bring more energy to the third set, even taking 6-5 and 9-8 leads. However, Free State regained momentum and jumped back ahead with a 14-11 advantage.

The Lions fought back to cut the lead to 24-20, but it wasn’t quite enough as Free State held on to take the set and the match victory.

Harris, with this being her final City Showdown, said the match meant a lot even though the end result didn’t go her way.

“It definitely means a lot since it’s (my) last one,” Harris said. “We only have so many games left and postseason isn’t guaranteed. There’s only two public high schools in Lawrence, so everyone wants to beat the other team.”

On the other side, Hamilton was proud to have such a raucous crowd for her final City Showdown due to volleyball being “really underrepresented” in recent years.

“Oh my god,” Hamilton said. “It’s been a different atmosphere every year. It just means a lot that people from LHS and Free State are able to come together to support volleyball and women’s sports in general.

“It’s really good to see a lot of people come out.”

Next up, Free State goes on the road to face Olathe South on Thursday, while LHS takes on Gardner Edgerton at home on Thursday.