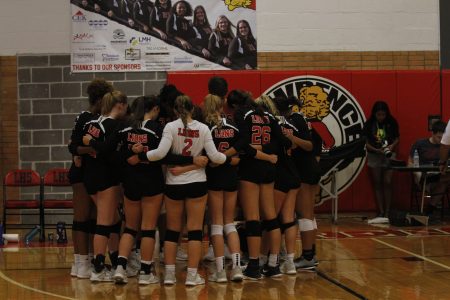 The Lawrence High volleyball team huddles up during its season opener against Blue Valley Northwest Tuesday, Sept. 3, 2019, at LHS.

LHS won just one of its five matches during a home tournament Saturday afternoon, though it battled in each tilt in what could end up being an important test for the defending 6A state champions. Lawrence’s lone victory came against Olathe Northwest, winning in straight sets (25-15, 25-22) in the fourth match of the day.

LHS will travel to Free State at 6 p.m. Tuesday.

Bishop Seabury’s volleyball team fell in straight sets to Wellsville (25-17, 25-15) in a home match to Wellsville on Saturday afternoon.

BSA will host a triangular with Kansas City East Christian and Veritas at 5 p.m. Tuesday.

Tonganoxie’s boys cross-country team won the Perry-Lecompton Invitational with a score of 37 points, which was 59 points better than runner-up Bishop Miege. PLHS placed fourth with a score of 111.

On the girls side, Perry-Lecompton finished as a runner-up in its home meet with a score of 57 points. THS took third with 76 points, while Anderson County won the race with 37 points. Tonganoxie junior Kristi Chambers placed fifth with a mark of 23:23.91. Senior Blaise Ball led the Kaws with a time of 24:21.39, which was good enough for 15th place.

Both Eudora cross-country teams were in action at the Council Grove Invitational. EHS won the girls race with 39 points, while the boys team claimed second place.

Free State’s gymnastics team won a meet at Newton High School on Saturday with team score of 101.450. Lawrence High placed fourth in the same meet, scoring 90.400 as a team.

Ashley Mai notched fourth in vault, and Finkeldei registered fifth on the floor routine. Williams took second in beam and sixth in floor.

For the Lions, Paris Spotted Tail claimed the top spot in the all-around rankings. Spotted Tail was first in floor, second in vault, third in beam and fifth in bars.

Both teams will be back in action in a quadrangular at LHS at 6 p.m. Monday.