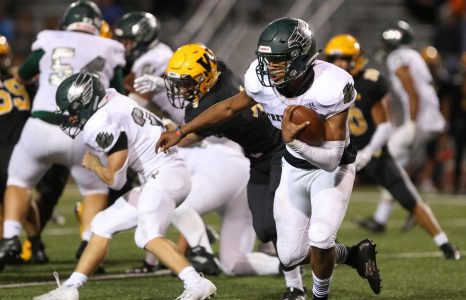 Free State junior kicker Joey Wood ran around the field with 1:45 left in the first half, seemingly in disbelief after the Firebirds recovered their own kickoff.

They capitalized on the opportunity, too, with Free State senior quarterback Malik Berry finding senior wide receiver Tae Rainey for an 18-yard touchdown.

“I’ve got to be honest, the only thing that was going through my head was I was disappointed we got a penalty after the touchdown,” Free State head coach Kevin Stewart said. “It was his first touchdown of the year, so I get that he was excited.”

These two plays and more propelled Free State to a convincing 48-6 victory over Sedalia Smith-Cotton (Mo.) Friday night in an out-of-state road matchup.

It didn’t take long for the Firebirds to get going either, as Berry orchestrated an opening drive with an 18-yard pass to Rainey and a 52-yard pass to senior wide receiver Marcus Preston. And as he’s done all season, junior running back Tyler Bowden capped off the drive with a touchdown.

Near the end of the quarter, Bowden once again found the end zone, this time in a slightly more explosive fashion as he burst upfield for a 52-yard score.

The momentum remained in Free State’s favor in the second quarter, as the defense stopped Smith-Cotton on a fourth-and-1 play, setting up a 29-yard touchdown from Berry to senior wide receiver Tate Fanshier.

Berry added another score as he Eurostepped his way into the end zone with an 8-yard touchdown run to give Free State a 27-0 lead.

However, the Smith-Cotton offense woke up, converting its first first down of the night with 5:25 to go in the first half. In fact, the Tigers converted four first downs, capped by a 48-yard touchdown run from running back Cameron Finley.

Stewart was proud of the defense’s effort Friday night, with the Firebirds giving up just 177 yards to the Smith-Cotton offense. But he still wants “perfection,” and wanted to shut out Smith-Cotton.

“We gave up a big run; that’s kind of been our Achilles heel so far — the big plays,” Stewart said. “So we’ve kind of got to clean the big plays up. If it’s not for the big plays, we’ve been great defensively.”

While this could have been the beginning of a comeback, Smith-Cotton attempted an onside kick but did not recover the ball. Instead, Free State secured the ball at the Smith-Cotton 41-yard, setting up a 26-yard touchdown pass from Berry to Rainey.

“I was really happy to see Tae Rainey get some more touches tonight and hopefully we can get him more involved in the offense and get him coming along,” Stewart said. “He’s a good athlete.”

The Firebirds got the ball right back shortly after as well, with Wood’s kickoff being somehow recovered by Free State once again in Smith-Cotton territory.

Free State held onto a commanding 41-6 lead at halftime, led by Berry completing 10 of 14 passes for 218 yards in the first half.

“Yeah (Berry’s) good when we can give him time and keep him upright and not get him hit all the time,” Stewart said. “I thought he did a good job, had some good receivers get open and run routes. And he was able to find them, so that was good to see.”

Bowden also rushed for 120 yards on 10 carries before the break.

The Firebirds opted for a change out of the break at quarterback as junior Daniel Kufahl replaced Berry under center. Sophomore running back Dash Cleveland replaced Bowden as the lead tailback as well.

While Stewart thinks Bowden is a “stud,” he wants to keep his lead back healthy and share more carries with players such as Cleveland.

“He looks really good out there,” Stewart said of Cleveland. “We’ve just got to get him a little bit more experience. But when he gets the ball out in the open field he can make some plays.”

After a quick third quarter, Kufahl threw his first touchdown pass of the night to wide receiver Baylor Bowen for a 14-yard score in the corner of the end zone.

Both sides opted to run the ball for the majority of the second half, with Finley finishing with 131 rushing yards on 20 carries.

“I think they’re going to be good opponents, all three of them,” Stewart said. “I think each team gets better as the year goes on, so we’ve got to get better as well.”

Free State will next play at Olathe South on Friday, Oct. 11.