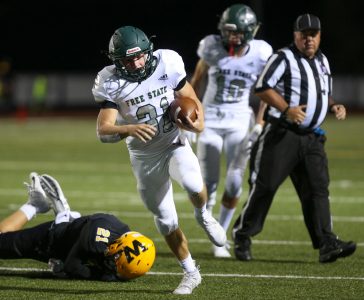 Free State running back Tyler Bowden leaves Shawnee Mission West defensive back Wesley Clark on the turf as he heads in for a touchdown during the first half on Thursday, Sept. 26, 2019 at Shawnee Mission South High School.

At the time, which was two years ago, Stewart was preparing for the state championship game as the defensive coordinator for Blue Valley North. He was watching film on Derby, which had beat Free State in the 6A quarterfinals two weeks earlier.

Bowden, who was a freshman, piled up 88 yards and a pair of scores in the loss to Derby in his first meaningful varsity action.

“I remember thinking, ‘Wow, I can’t believe these guys can’t tackle this freshman,'” Stewart said. “But now I kind of understand at least. He changes speed so quick, and puts his foot in the ground. Even as a freshman, he was pretty quick.”

While the performance against Derby served as Bowden’s introduction as a playmaker, this fall has been his first chance at embracing a prominent role for the Firebirds.

Bowden has been brilliant as the team’s starting running back, piling up 730 yards and 10 scores on 81 carries through the first four games of the season. Free State has jumped out to a 3-1 clip in Stewart’s first year at the helm.

“I’m pretty happy with my season. It is going better than I expected,” Bowden said. “I’m being involved a lot more than I figured. The line has helped me out a lot, too.”

Bowden’s emergence has been necessary for the Firebirds after Jax Dineen graduated and went on to play at Kansas State. Dineen recorded eight consecutive 100-yard rushing performances last season, finishing with 1,307 yards and 16 scores on 149 carries.

It didn’t leave much room for other backs, like Bowden, to get much of a workload last year. In fact, Bowden accumulated 302 yards and four scores on 39 carries in 2018. But he developed as a player by being behind Dineen.

“Last year, I was just learning things from Jax and adjusting to the varsity speed,” Bowden said. “Having Jax was great. He’s a good role model.”

In preparation for a bigger role, Bowden got stronger this offseason thanks to a commitment in the weight room. His best attribute is still his speed, which Bowden displayed as a member of the track team last spring.

Bowden’s speed sometimes causes him to run past his holes, something he hopes to get better on throughout his junior campaign. But Bowden has been nothing short of stellar through the first half of the regular season.

“I’m very impressed with how good he is,” Stewart said. “He’s been awesome, he can hit the hole and he’s quick. He’s got several moves, he’s shifty. He’s got a lot of top-end speed. He’s definitely been a big-time player for us.”

Another city player who made his debut against Derby was Lawrence High quarterback Jackson Dooley. And it served as an important lesson for Dooley, who went 8-for-22 for 71 yards in a lopsided loss in the first round of the playoffs.

“I was for sure not ready for that,” Dooley said. “They were just big, physical guys and I wasn’t ready.”

Dooley only started that game due to an injury of last year’s signal caller Tre Jackson. But shortly after that performance, LHS head coach Steve Rampy challenged Dooley to compete with Jackson for the starting job in 2019.

That is exactly what Dooley did. Dooley split reps with Jackson during summer camps before he ultimately showed enough to the coaching staff to earn the starting job. It allowed Jackson to make an impact by playing multiple positions on both offense and defense.

Dooley has started every game at quarterback for the Lions, who are now 4-0 to start the season for the first time since 2015.

“Going into last year, I don’t think he ever saw himself as a varsity quarterback,” Rampy said. “Self-perception is everything. I saw those qualities, and I told him that I don’t want him to prepare as our backup quarterback at all. The best thing about him is his mental durability.”

Dooley is coming off one of his best statistical showings of his young career. In a 52-21 win over Olathe Northwest, Dooley was 12-for-14 through the air for 202 yards and one touchdown. The Lions didn’t have to punt once in the win, and a lot of that was due to their success through the air.

One week earlier, Rampy credited Dooley’s play following Lawrence’s upset of Gardner Edgerton on the road. Dooley made a number of plays down the stretch to help LHS earn a narrow victory against what was then the No. 2 team in Class 6A.

“I thought after the Gardner game he was our MVP,” Rampy said. “He’s starting to get our whole offense. Once he gets it all, he’s going to be really good.”

While Dooley has plenty to improve on moving forward, there is a lot to appreciate about how he’s done thus far.

Dooley’s football IQ is high, which helps him make the right read on run-pass-option plays. Dooley is able to make his progressions when he has to go to the air, and he has a better sense of the offense in Rampy’s second season at the helm.

And a lot of that is a credit to Dooley’s role last year, when he served as a the scout-team quarterback and held a clipboard during varsity games.

“It helped me see the reads that Tre and Garrett (Romero) were making,” Dooley said. “It helped me, knowing what I’m supposed to do.”

“They are going to pose a great challenge,” Rampy said. “It is interesting to go from (facing) the option two weeks in a row to a team that is going to be predominantly a passing team.”

Hedges tallied four birdies and 10 pars, finishing with an even-par 72 at Village Greens Golf Course. Hedges recorded a 37 on the front nine and was 1-under par 35 on the back nine to notch a first-place finish.

On the same day, and in similar conditions, Free State’s girls golf team earned a ninth-place finish with a mark of 359 at the Lawrence High Invitational at Eagle Bend Golf Course. LHS finished 18th out of 21 teams with a score of 441. Shawnee Mission East won the event with a 316.

Addyson Meadows paced the Firebirds, shooting a 87 to finish 28th on the individual leaderboard. Kennedy Birk placed 33rd with a 88, while Kate Lawrence ended up in 38th with a 89. Claire Covert and Claire Berquist both broke 100 by shooting 95 and 96, respectively.

Rylie Hayden led the Lions with a 95, which was good enough for 60th place. Emma Parsons shot 105, while Josie Abernathy carded a 107.

Bishop Seabury cross-country was in action Thursday night at Maranatha.

On the girls side, senior Sabrina Eicher led the team with a mark of 21:58 to take sixth place on the individual leaderboard. Sophomore Diego Klish finished 14th in the varsity boys race with a time of 18:44.