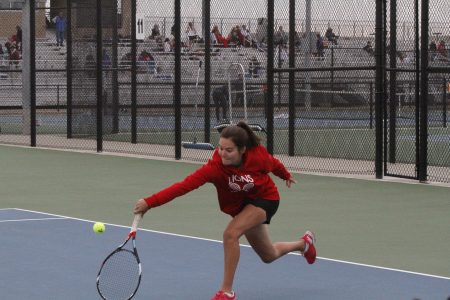 Even though it is October, a sudden drop into cooler weather made things a bit tricky at the Sunflower League girls tennis tournament Thursday.

Free State junior Keegan VanPelt also commented about the change in the weather.

“I’m kind of used to it; this time of year is always chilly,” VanPelt said. “But it’s a little bit of a difference because it’s been warm lately.”

Despite the weather, Free State as a team managed a fourth-place finish, while Lawrence High finished 10th as a team at the league meet.

Wednesday’s temperatures reached into the 80s while Thursday sat in the mid-50s for the majority of the day. This forced most of the players to put on more layers — many players opted for long sleeves and pants — and adjust their in-game strategies.

“I also thought, the lower the temperature, the lower the ball drops,” VanPelt said. “So I tried to keep that in mind and think about where I was placing it and having to run more.”

Regardless, both Derby and VanPelt did their best to stay in the moment. Derby relied on a routine that consisted of looking into her racket, regaining her composure after each point and gathering her thoughts.

And while Derby always maintains a calm demeanor on the court — she jokingly said she should “show more emotion” — she said she relies on her teammates to help calm down in between matches.

“Just discussing what I could have done better and just having fun with them,” Derby said. “I just like being here and bonding with my teammates. That’s really fun.”

Meanwhile VanPelt — who finished third in singles play — showed plenty of emotion during her semifinals and third-place matches with fist pumps and triumphant screams in between points.

“I think it’s just a good way to make sure I’m in the match and just keep going,” VanPelt said.

VanPelt emphasized “knowing where you’re at and focusing” to overcome the intensity of matches or any abnormal weather, which she said helped her to a top-three finish Thursday.

For Derby, she felt a bit thrown off by the cooler weather but was able to find some positives from Thursday’s tournament.

“I think some matches I played better than others,” Derby said. “It was just really hard with the weather today.

“It would have been nice if I could’ve gotten in the top 10, but I’m OK with the fact that I’m not because I had fun with my team and it’s just really fun being here.”

Both Free State and LHS will next compete in Class 6A regionals Oct. 11.