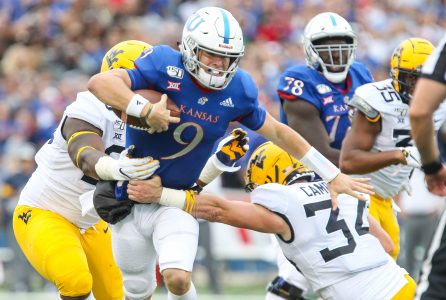 Kansas quarterback Carter Stanley (9) is corralled by the West Virginia defense on a run during the third quarter on Saturday, Sept. 21, 2019 at David Booth Kansas Memorial Stadium.

It really stood out to Kansas quarterback Carter Stanley when he rewatched the tape from the Big 12 opener.

In the loss to West Virginia, KU only had the ball for 55 snaps and that was largely due to the team’s inability to change things up on first down. It forced the Jayhawks into unfavorable down-and-distance situations, which prevented them from sustaining any sort of rhythm on drives.

KU ran the ball on over 65% of its first down attempts against West Virginia just two weeks ago.

“I just felt like we have to get good plays on first and second down to avoid third-and-long,” Stanley told reporters prior to KU’s matchup against TCU last week.

Yet, despite that self awareness leading up to last week’s road tilt, Kansas was even worse on first down against TCU. It was a key reason why the Jayhawks seemingly never had a chance during a 51-14 loss to the Horned Frogs. The offense was on the field for just 47 plays in the latest defeat.

Kansas (2-3, 0-2 Big 12) has had its moments on offense through five weeks, most notably in its 48-24 win at Boston College. But when the Jayhawks have struggled on first down, it has often led to a lackluster performance by the offense.

To illustrate how KU has done on first down through five games, I went back and charted every such instance from the play log of each game. This graphic helps better show how Kansas has done so far this season in that area: 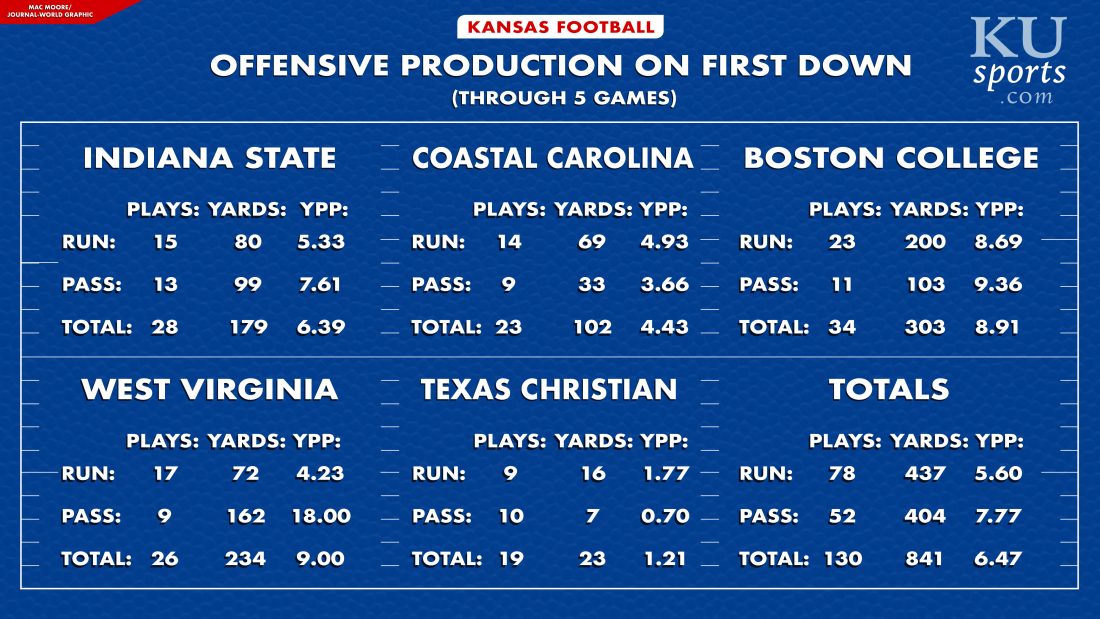 A look at how Kansas has done on first down through five games of the 2019 season. Graphic by Mac Moore.

The first thing that stood out to me was how abysmal KU was on first down in its worst two offensive performances (Coastal Carolina and TCU) of the season.

KU averaged 1.21 yards per play on 19 first down attempts in Fort Worth in Week 5, which was its worst showing of the season. Part of that is due to the predictability of those plays, particularly in the first half.

The Jayhawks ran the ball five times on as many first down plays to open the game, as three of them resulted in either negative yardage or no gain. As a result, KU was often behind the sticks and was forced into a trio of three-and-outs on its first four possessions.

It is a big reason why the Jayhawks have struggled to convert on third down through five weeks. KU frequently was in third-and-long situations against TCU, which resulted in a 1-for-11 effort on third down.

For the season, Kansas has converted just 21 of its 58 attempts on third down and ranks 94th in the nation in that category. KU is actually just 5 of 21 against Big 12 opponents, with No. 6 Oklahoma coming to town this weekend.

So what can the Jayhawks do to fix these issues? Well, the numbers suggest that they should open it up a bit more on first down.

Despite that big of a difference, though, KU has still attempted a run on 60% of its first down attempts through five games. Kansas has elected to run more on first down in four of its five outings this season.

With opposing defenses keying in on the run, it would probably be more efficient for the Jayhawks to take more shots through the air. For one, it is more likely to result in a big play like when Stanley linked up with receiver Andrew Parchment for a 75-yard touchdown against WVU.

It would help keep opposing defenses off balance, especially early in the game when teams are trying to stack the box. It might even create more running lanes for Pooka Williams, assuming defenses have to respect the pass on first down.

And that is perhaps the most important element about all of this. The Jayhawks don’t need to just throw the ball on every first down to have success. They just have to mix it up enough to keep Big 12 defensive coordinators guessing.

If that happens, then Kansas might just be able to sustain more offensive drives moving forward. And that could keep this team in more games during Year 1 of the Les Miles era.