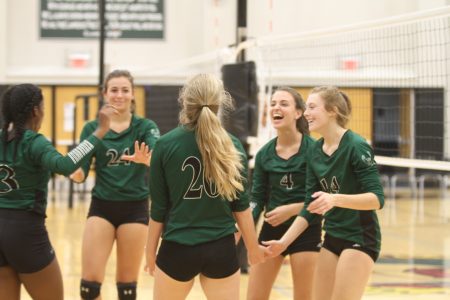 Many athletes have fueled this recent run by the Firebirds. For the season, senior Kaitlyn Hamilton paced the team with 102 kills. She was even named to the all-tournament team at the Seaman Invitational this past weekend.

Freshman Aubrey Duncan is leading the team with 37 total blocks, though both senior Haley Hippe (27) and Hamilton (20) have also been forces at the net. Rylee Unruh has registered a team-high 104 digs in 29 sets played. Unruh and senior Mya Gleason each have 12 aces on the year.

Gleason is leading the team with 127 assists, while senior Emily Arensberg also has 108 assists this fall.

Free State will take on Lawrence High at 6 p.m. Tuesday.

Entering Tuesday, both Asjah Harris and Gianna Cooper led the team with 68 kills. Keely English is pacing the squad with 111 assists, while Brenna Schwada has 107 assists on the year.

Lawrence will play host to Shawnee Mission East on Thursday.

The Chieftains scored both of their goals in the first half, with each coming off the foot of Javi Trujillo. Louisburg, which scored once in the first half, forced overtime with a second-half score. LHS then delivered the game-winning goal in overtime.

With the postseason just around the corner, KSHSAA has released multiple regional assignments this week.

For cross-country, all regional meets will take place on Saturday, Oct. 26. Lawrence High and Free State will both be in the same 6A regional meet at Milford State Park. Baldwin will host a 4A regional meet, which will include both Eudora and Tonganoxie.

Perry-Lecompton, which is a 3A program, will participate in a meet at Leonardville Golf Course. Bishop Seabury will compete in a 2A regional meet at Richmond Central Heights.