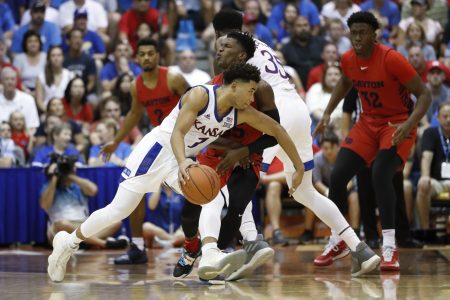 It takes a big-time player to win championship games. And it helps even more if a team has two such players.

That is exactly why No. 4 Kansas won its third Maui Invitational with a 90-84 overtime win over Dayton in the championship game Wednesday at the Lahaina Civic Center. The tandem of Devon Dotson and Udoka Azubuike combined for 60 points to help the Jayhawks earn their sixth win in a row.

Dotson scored a career-high 31 points on 11-of-16 shooting from the floor, including an 8-for-10 effort from the charity stripe. Azubuike registered a career-best 29 points, shooting 12-of-15 on the night.

Kansas (6-1), which also won the Maui Invitational in its last trip in 2015, now has a 15-6 record in Maui for this event. The Flyers (5-1) suffered their first loss of the season, but certainly warranted some Top-25 consideration in next week’s AP poll following their performance in this tournament.

Azubuike scored the first nine points of overtime for KU. His dominance in the free period was necessary after Dayton hit a 3-pointer in the final seconds to even the score at 73-73.

But the game was a slugfest well before that moment.

Azubuike hit a turnaround and then netted the ensuing free throw, giving the Jayhawks a 69-66 advantage at the 2:25 mark. It capped an 11-0 run by Kansas after Dayton appeared to be pulling away.

Dotson consistently had strong drives to the basket, most of which came off solid ball screens by the posts. Dotson was superior at finishing at the rim against Dayton, regardless of how many players attempted to thwart him.

One example of an impressive finish by Dotson occurred in the first half, when he ran toward the rim on a back-cut. Ochai Agbaji hit him in stride, and Dotson finished the sequence off with a reverse layup.

• Defensive highlight: The Jayhawks had a pair of impressive defensive plays in the first 20 minutes of action.

The first was an emphatic swat by center Udoka Azubuike, in which the big man had to leave the floor with a big leap. Azubuike stuffed the floater attempt by the Flyers, as the ball rolled out of bounds.

The second block came by Agbaji off another athletic play. Agbaji met the layup attempt at the rim, denying things with a basket-saving block.

Oh my, Ochai. Ochai Agbaji said meet me at the rim. What a block! #kubball pic.twitter.com/Wg7qMjuVaU

The projected first round draft pick in the upcoming NBA Draft had a relatively quiet first half, however. He naturally received a lot of attention from KU defenders, as Marcus Garrett started out on him. Agbaji got his turn on Toppin when Garrett was on the bench with two fouls.

OBI TOPPIN HAD HIS BACK TO THE RIM AND STARED DOWN KU’S BENCH BEFORE THE BALL WENT IN. pic.twitter.com/DJ4yLu8PDb

• Up next: Kansas will play host to Colorado on Saturday, Dec. 7.