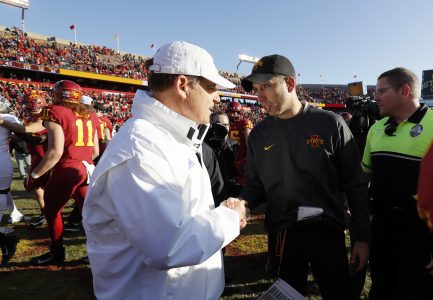 Ames, Iowa — For moments Saturday in the final road game of their college careers, it looked like the Kansas football team’s seniors might actually pull it off.

However, for the 11th year in a row, the season came and went without the Jayhawks winning a Big 12 road game.

“It was just one of those days — I’ve been a part of this before — where guys in the locker room, just kind of everyone feels good,” senior quarterback Carter Stanley said, indicating he thought this might be the day the streak died.

Stanley said it would have felt “incredible” to be on the Kansas team that finally put an end to the conference road skid.

“Just being here for five years and some of the stuff I’ve been through that would have meant a lot,” Stanley said. “Just to be a part of the team that goes on the road and beats a Big 12 team.”

A starter since his freshman year in the secondary, KU senior safety Mike Lee said for four years his focus on the road has been the same as it is during home games: to compete and fight for wins.

“We showed we can compete with anyone,” Lee said of the loss at ISU, when the Jayhawks led in the fourth quarter. “The coaches can’t do it for us. All they can do is call the plays. We have to put ourselves in position to make plays and stop them from getting them in the end zone.”

Kansas hasn’t won a Big 12 game in an opponent’s stadium since its 2008 trip to Iowa State. The Jayhawks at least put their true road game losing streak to rest in 2018, with a win at Central Michigan. They also won on the road at Boston College earlier this year.

At times this season, KU has asked freshman quarterback Torry Locklin to come in off the bench and run out of the Wildcat formation.

During Saturday’s loss at ISU, the true freshman appeared for the fourth time this season, mostly as a running back.

“We’re using him in two spots,” KU head coach Les Miles said of how he wants to use Locklin this season. “He will be a Wildcat quarterback and a running back.”

Locklin only rushed one time for two yards in the defeat.

After missing most of KU’s loss at Oklahoma State due to injury, left guard Malik Clark returned to the lineup at ISU and was able to play the majority of the game.

In KU’s past three games Clark often had to check in and out while battling an unspecified ailment. But he rested far less frequently against the Cyclones, in his 11th start of the season.

• KU sophomore running back Pooka Williams went over the 2,000-yard mark for his college career in the Jayhawks’ loss at Iowa State, making him the first KU back to pull that off in his second season since Gale Sayers (1962-63).

Williams produced 154 rushing yards against the Cyclones, bringing his 21-game total over the past two years to 2,070 rushing yards.

• Only one QB in Kansas history has thrown more career touchdowns than Stanley. That man obviously is Todd Reesing (90), but Stanley secured sole possession of second place, moving past David Jaynes (36) on his fourth-quarter connection with Stephon Robinson Jr.

Stanley has thrown 24 TD passes this season, with three coming at ISU.

• A redshirt freshman from Lawrence, fullback Spencer Roe hadn’t ran the ball or caught a pass as a college player until Saturday. A third quarter play call near the goal line, however, made the unlikely target the perfect candidate for a two-yard touchdown on a throw from Stanley. Roe, a Free State High graduate, helped KU take a 24-21 lead with the catch.

• Lee reached a new career high with 13 total tackles in KU’s loss at ISU. It topped his previous season best of nine stops, as well as his former career best 12.

• Jay Dineen also finished with double digit tackles and a new career high. Dineen, a former teammate of Roe at Free State, finished with 10 total tackles, beating his previous best of six, which came the week before at Oklahoma State.

• Junior KU kicker Liam Jones made a career-high three field goals at ISU, all of them coming in the first half. Jones connected from 30, 36 and 37 yards. He missed a fourth try from 35.