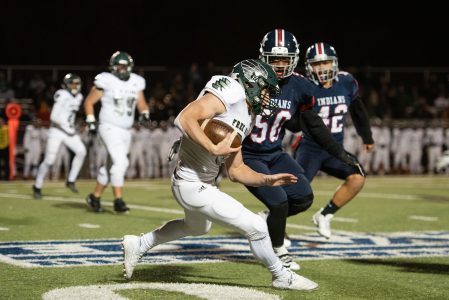 Tyler Bowden (31) runs the ball on Free State's first drive down the field Friday night at Bishop Stadium on Nov. 9, 2019. Photo by Nickolas Oatley of the Manhattan Mercury

For the second season in a row, Manhattan High eliminated Free State in the 6A West playoffs in convincing fashion. MHS controlled the trenches on both sides of the ball in its 49-28 victory against FSHS Friday night at Bishop Stadium.

“I thought we could have competed a little better tonight, especially in the first half,” FSHS coach Kevin Stewart said. “The second half, I thought we did a good job. We battled and we didn’t give up. There is no reason that shouldn’t have been the way it was in the first half.”

It was reminiscent of the way that the Indians rolled past the Firebirds for a 41-19 win in the Class 6A quarterfinals in 2018. Yet perhaps the perfect illustration of how Manhattan did it for the second year in a row took place on its final offensive drive of the first half.

MHS (9-1) used a 16-play, 83-yard possession to take a 28-7 lead at the intermission. The seven-minute drive ended with a 2-yard touchdown run by Manhattan running back BJ Young, while Free State’s exhausted defense marched toward the sideline in defeat.

The Indians, who will now have a matchup with defending state champion Derby in the 6A quarterfinals, kept it simple on the decisive drive. Manhattan ran the ball 15 times behind a ground game that mostly consisted of runs from Dayne Aschenbrenner, Lorenzo Wilhoite and Young.

“I think we need to be a little more physical,” Stewart said. 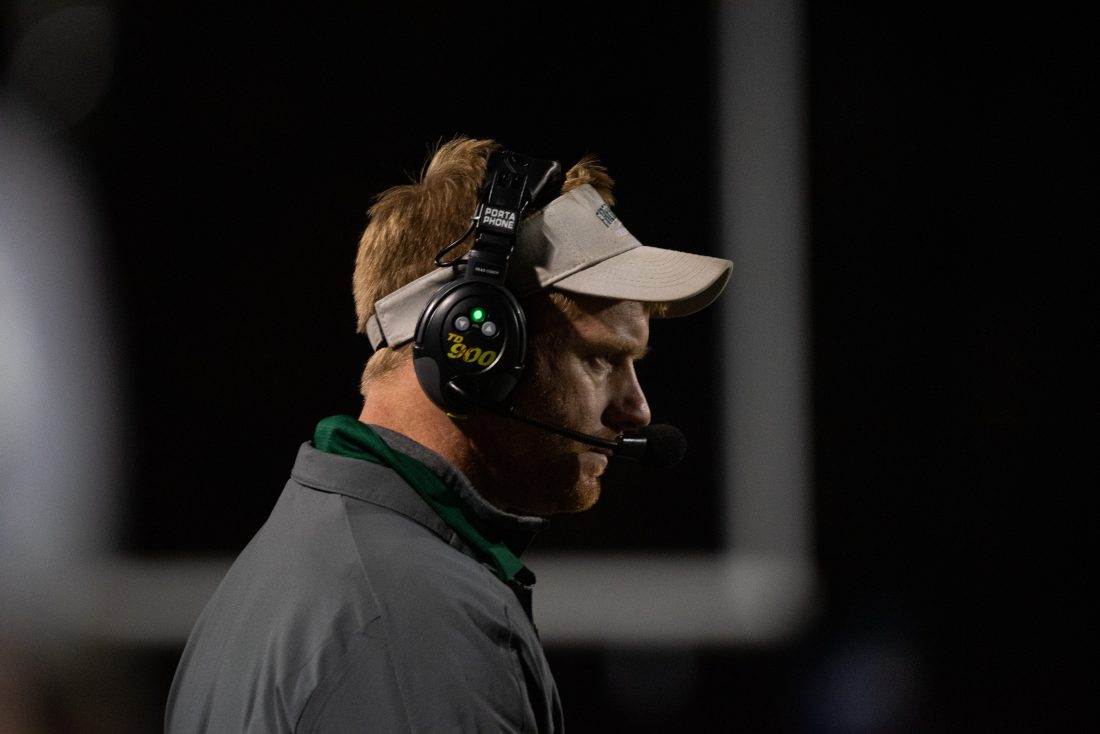 Free State head coach Kevin Stewart watches from the sideline as his offense drives down the field Friday night at Bishop Stadium on Nov. 9, 2019. Photo by Nickolas Oatley of the Manhattan Mercury

Free State, which was giving up an average of 17 points per game entering Friday, only stuffed one run at the line of scrimmage thanks to a strong play from senior defensive end Devon Buck.

It was a rare stop by the Firebirds, who had multiple opportunities to get the offense off the field. Manhattan actually converted on two third-down attempts during the 16-play drive, the first of which was the lone pass play of the possession.

On third-and-5, Aschenbrenner found a hole in the Free State secondary and connected with junior Mason Reid for an 15-yard completion. A few plays later, Young picked up 4 yards on third-and-3. Young eventually capped the long drive off with a 2-yard touchdown run at the 1:19 mark.

Much like last year’s lopsided contest, MHS dictated the style of play with a strong ground game and an overwhelming defense. And that was evident from the start.

The Firebirds were forced into a three-and-out on their opening possession, gifting the Indians favorable field position. Five plays later, MHS claimed a lead that it wouldn’t relinquish with a 7-yard touchdown run by Wilhoite.

FSHS elected to punt on its next possession near midfield, and Manhattan scored one play later on a 91-yard touchdown when receiver Joe Hall got behind the secondary and Aschenbrenner hit him in stride.

The Firebirds found success on a couple of long completions between senior quarterback Malik Berry and senior receiver Marcus Preston on the ensuing drive, which ended with a 2-yard touchdown run by Berry. Free State never had an answer for Manhattan’s offense, which scored on all four of its first-half drives.

“They are a good team,” Stewart said. “They are well-coached in what they do, which is basically fundamental blocking. They just get a hat on a hat.” 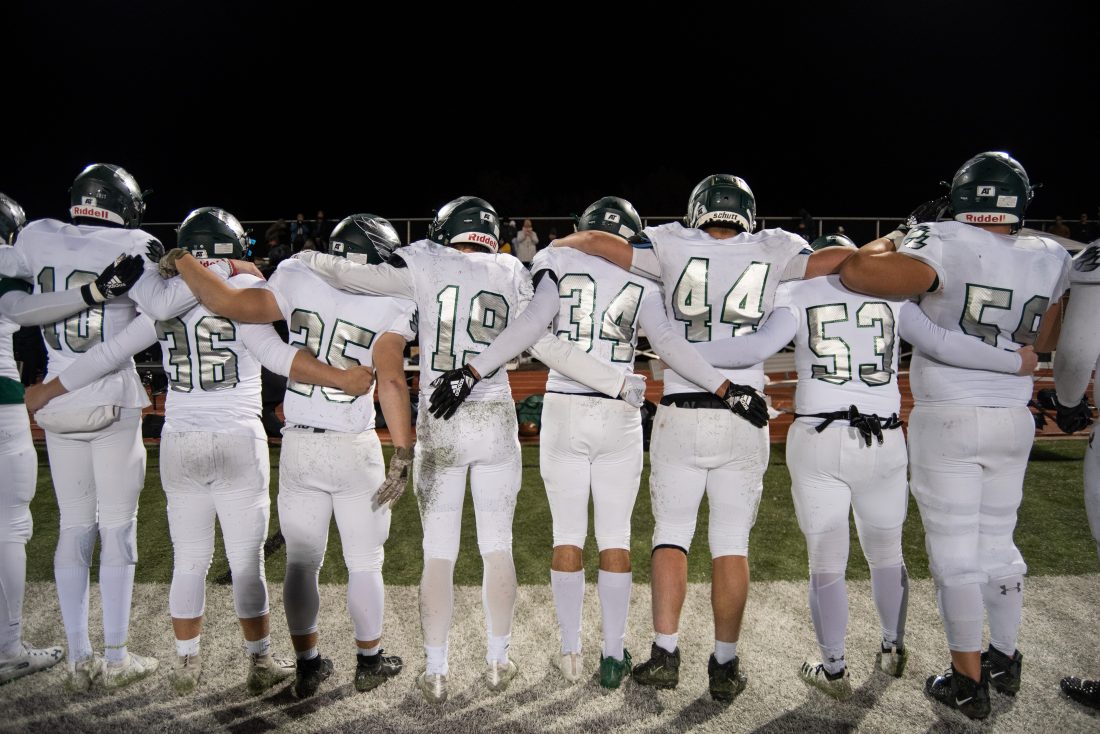 Free State players lines up on their sideline after the game Friday night at Bishop Stadium on Nov. 9, 2019. Photo by Nickolas Oatley of the Manhattan Mercury

Manhattan removed any doubt about the outcome on its first drive of the second half. On third-and-10, Aschenbrenner scrambled to his right before linking up with senior tight end Tyler Higgins for an 80-yard touchdown pass.

Bowden scored on a 24-yard touchdown run in the third quarter, and Free State’s defense netted more stops after that. But it proved to be too late to make a difference. Berry was sacked seven times by Manhattan’s defense.

The loss snapped a seven-game win streak by the Firebirds, who discovered their identity after a 26-17 loss to Olathe East in Week 2. Free State ultimately finished with a 8-2 record in Kevin Stewart’s first year at the helm.

“I thought there were ups and downs,” Stewart said. “But we had a successful year, 8-2 is not a bad record at all. I would have liked to finish a little bit better.”