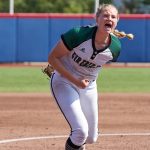 Free State pitcher Tatum Clopton explodes after a strikeout during the Firebirds' 1-0 state title game victory over Washburn Rural on Saturday, May 25, 2019 at Arrocha Ballpark.

It was a sensational spring for Free State sophomore Tatum Clopton.

Clopton enjoyed her first full year in the circle, helping the Firebirds secure a second consecutive state title. Clopton baffled opposing hitters all year and did not give up a single run in her five postseason performances, including three shutouts in the Class 6A state tournament.

On Thursday, Clopton was rewarded for her play and made history in the process. She was named the Gatorade Kansas Softball Player of the Year. It marks the first time a player has been picked for this honor from Free State’s softball team since the program was formed in 1997.

“We have had good teams in the past, we just haven’t had that level of a pitcher in the circle,” FSHS coach Lee Ice said. “One of the things I have always told the kids about postseason awards is that it happens because of the success of the team. I think she would be the first person to compliment them. Without them, some of this recognition wouldn’t happen.”

Free State certainly accomplished a lot this year, and that’s a credit to Clopton’s dominance in the circle. During the state tournament, Clopton whiffed 30 batters across 21 scoreless frames in three games. She only allowed two batters to reach third base en route to wins over Olathe Northwest, Olathe North and Washburn Rural last weekend.

“The first one, we were not expected to do that,” Clopton said after the state championship game. “This was stressful for some people. It was always tight, it was always a competitive game. Last year was more fun because we were just up there having fun. We knew we were not supposed to win it and if we didn’t, it would have been OK, we always had the next year. This year, we had a target on our back. We were always doing something to the best of our abilities.”

“I don’t know if I expect it,” Clopton said following a perfect game in the regional championship. “But I do expect myself to pitch the best I possibly can every time I go out and pitch. And if that involves throwing a perfect game or a no-hitter, that’s what it is.”

Clopton is the No. 11-ranked recruit in the Class 2021 by Softball America. She has verbally committed to Oklahoma State, and also has a 3.76 GPA in the classroom.

“She’s been pretty consistent,” Ice said. “What she did at the end was not much different from what she did at the very beginning. The level of competition got better in the last five games. For her to be able to duplicate that in a three-game stretch in the state tournament was outstanding.”

With two state titles and a prestigious honor under her belt, there is no telling what Clopton and the Firebirds can accomplish over the next two seasons.

“It will be interesting to see how our team responds and what incoming freshmen come in because we are losing a bunch,” Clopton said. “Yes, it brings the pressure. Every year is different and every team competes differently. I think we have to wait out until next season to see what we have.”