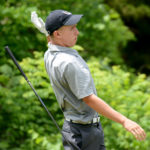 Free State junior Landon Berquist lets go of his driver after teeing off on the third during state golf championship tournament play Monday, May 21, 2018, at Ironhorse Golf Course in Leawood.

It will be an unfamiliar feeling for Free State senior Landon Berquist.

Berquist has plenty of experience with postseason golf, as Monday marks his fourth trip to the state tournament in as many years. But it will be his last action as a Firebird, capping a stellar high school career.

“It is surreal that it has flown by,” Berquist said. “But I have enjoyed every second of it.”

Berquist will be going with the entire Free State boys golf team for the third year in a row. The 6A state golf tournament is slated to take place at Sand Creek Station Golf Course in Newton. Due to forecasted weather, shotgun start will begin at 7:30 a.m. Monday.

It was actually during his first trip to the state tournament that Berquist realized he could golf at the collegiate level. He placed 15th as an individual at state, despite battling nerves in the beginning. Berquist continued to play well that summer, and started to garner some collegiate offers.

“I realized I had a chance to play beyond high school,” Berquist said. “It has been a lot of practice. Thanks to the coaches and the program, they have set a standard. I’m looking forward to going for a fourth year.”

Berquist started golfing in the sixth grade, and he quickly discovered it was the only sport he truly cared about.

“Part of it is that I’ve seemed to separate myself apart with my work ethic,” Berquist said. “It just seemed to come natural. It wouldn’t matter the time or the weather.”

That type of commitment has been evident for the entire FSHS program since Chuck Law took over as head coach four years ago. The Firebirds have qualified as a team in three of his four years at the helm, and even sent four individuals in his first year.

Berquist, who finished 11th at state last year, is one of four Free State golfers to average less than 90 in nine rounds this season. Berquist has the best average score on the team with a 76.6, which ranks his 17th in Class 6A. His lowest score on the year is 72.

Junior Andrew Park, a three-time state qualifier, has an average score of 79.2 with a low mark of 71 this season. He finished 20th at the state meet last spring. Senior Dylan Sommer has qualified three times, and has an average of 88.3 this year. Sommer shot a 78 two weeks ago, which was his lowest score of his high school career.

“It is pretty rewarding to see that I have been able to get better,” Sommer said. “I’m just trying to end on a good note. I want to keep it as low as I can.”

Mitchell Spriggs, a junior, has posted an average of 85.1 this year. Alex Gard and Nate Pilakowski has both broke 90 for their low scores this season as well.

“(Coach Law) set a standard,” Berquist said. “It will be fun to go as a team again.”

The two other city golf teams will be sending one representative in the final meet of the season.

Lawrence High senior Ross Brungardt will close out his career during Monday’s 6A state golf tournament. Brungardt notched his second consecutive state berth when he finished ninth with an 82 at the regional meet in Wamego.

Brungardt, who shot an 89 at state last year, has an average score of 85.1 in his senior season. Brungardt went as low as 81 during the Olathe North Invitational on May 6, and has posted a score under 90 in all but one meet.

Meanwhile, Bishop Seabury will be represented by freshman Will Hedges at the Class 2A state tournament at Hesston Golf Park. The shotgun start will begin at 8 a.m. Monday. Hedges has won all three of his meets of his BSA career.

This season, Hedges has an average score of 77. His lowest score, which was a 75, came in the first meet of his career at the Bonner Springs Invitational. Hedges is the younger brother of Faith Hedges, who won the 2A state tournament as a freshman in 2016. It marked the first state title from a golfer in Seabury history.