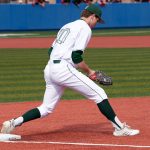 It is a week that Free State senior Jake Baker will never forget.

Six years ago, Baker got the opportunity to play at the Field of Dreams Ballpark in Cooperstown, New York. He played in multiple games during an under-12 youth tournament, and even hit a grand slam in one at-bat. Baker also won the Golden Arm Competition and toured the National Baseball Hall of Fame to cap off a memorable week.

Ever since that week, Baker has been committed to playing baseball for as long as he can. He used to hit baseballs off a tee in the garage and practice his fielding by throwing a tennis ball off the side of the house.

“That was probably the turning point,” Baker said. “I always knew I wanted to play at the next level, but that really sealed the deal and made me work even harder.”

It all paid off for Baker, who will play baseball at the collegiate level for the University of Kansas. But that means his days as a Firebird are numbered, as he enters his final postseason with Free State’s baseball team.

Although the Firebirds have relied on superb pitching this spring, Baker figures to be a key player given his experience. The left-handed hitting first baseman is a three-year varsity starter for Free State.

“He’s certainly a talented player that has been integral part to our success the last three years,” FSHS coach Mike Hill said. “You can be a good high school hitter and pull all day long. The real good hitters use the whole field. From the get-go, he demonstrated to me that he had the ability to use the entire field.”

Baker was thrust into the No. 4 hole as a sophomore on a talented Free State team due to his power. It proved to be a good experience for Baker, who got a chance to to make mistakes and ultimately learn from them.

“He learned by failing and that’s a great teacher,” Hill said. “I think that’s helped him grow and will be good for him when he goes to the next level.”

Baker came back and posted a stellar campaign as a junior. He hit .377 with seven doubles and 20 RBIs. His lone blast of the season came on a game-tying homer during extras against Shawnee Mission East. Baker was eventually named to the All-Sunflower League first team and received second-team all-state recognition.

This season, opposing pitchers have tried to pitch around Baker more often. He’s still managed to post a .298 batting average with three RBIs and four doubles. He also has a .452 on-base percentage, which is second on the team behind Peyton Sparks.

Baker helped the Firebirds go on a 14-game win streak and eventually claim their first Sunflower League title since 2013. Still, Baker hopes to secure some more hardware before his FSHS career is finished.

“I’m pretty excited for it,” Baker said. “From the start of the season to now, it is substantial where we have come as a group. Great coaches, who always put us in the right position. I’m looking forward to it.”