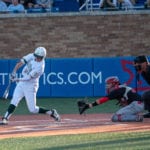 Free State’s Jake Baker (20) swings at a pitch in the second inning of a city showdown game against Lawrence High on May 7, 2018, at Hoglund Ballpark. The Firebirds beat the Lions, 10-2.

Bragging rights will be the only thing on the line Friday night. Well, that and perceived momentum heading into the postseason.

With regional assignments released and a Sunflower League title decided, there isn’t as much at stake for the city baseball teams in the regular-season finale. Yet Free State and Lawrence High are still just as motivated for a highly-anticipated City Showdown, which will take place at 6 p.m. Friday at Hoglund Ballpark.

“You can coachspeak it all you want and say it’s just another game, and it really is to us (coaches),” LHS head coach Brad Stoll said. “But these guys want to beat their crosstown rivals. There’s no other way to put it. It’s important to them.”

Coaches from both programs may try to treat the final City Showdown of the regular season in the 2018-19 school year as any other game, but the players appreciate the significance of beating their friends on the diamond.

Perhaps nobody understands that better than Free State’s senior first baseman Jake Baker, who had a memorable showing in last year’s 10-2 win over Lawrence. Baker went 4-for-4 with five RBIs in the lopsided win.

“We just have to take it one game at a time like we have been and just treat it like a normal game, even though it will be a pretty exciting game to be a part of,” Dobson said.

That being said, Friday’s crosstown clash serves as a good measuring stick for both programs ahead of the postseason. Even though this game might not have huge implications.

Free State (16-3, 10-1 Sunflower League) remained ranked No. 1 Class 6A in the latest poll by the Kansas Association of Baseball Coaches. Lawrence (14-5, 7-4) climbed up to No. 4 in Class 6A, even though it wasn’t ranked prior to the River City Festival just three weeks ago.

Both teams finished in the top-three of the 6A West division, and will be hosting regionals next week. If all goes according to plan, both the Firebirds and Lions hope to return to Hoglund Ballpark the following week for the 6A state tournament.

“Both teams are having exceptional years and the reason we play at KU is to put us in that environment,” FSHS coach Mike Hill said. “Hopefully the stands will be packed and it presents the kids an opportunity to be in a state tournament atmosphere.”

While both squads rank among the state’s best at this point in the season, FSHS and LHS took different paths to get here.

Free State dropped its first two games of the season before rattling off a 14-game win streak that lasted over a month. Ethan Bradford, David Stuart and Camden Karlin form a dominant rotation that has allowed two or fewer runs in all but three games this season.

Lawrence, meanwhile, had a nine-game win streak in April and racked up plenty of victories this year with impressive comeback performances. Dobson along with Devin Neal, Carlos Vasquez, Garrett Romero, Payton Cummins and Preston Harris have provided timely hits on a nightly basis.

“If you win Friday night and and turn around and get beat next week, it doesn’t matter,” Hill said. “We are looking forward to it, it is always a fun night. Kids enjoy playing against their friends. That’s what this is all about.”