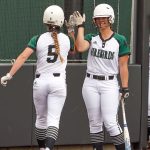 Free State's Georgia Rea (5) and Kay Lee Richardson (46) high five during a game against Shawnee Mission East on Tuesday, May 7, 2019, at FSHS.

The postseason is right around the corner for area baseball and softball teams.

Regional brackets were released Wednesday morning, as postseason action will begin next week. Multiple area teams will be vying for a state berth, including a pair of city baseball teams that earned the opportunity to host.

Free State and Lawrence High finished in the top three of a loaded 6A West division, which gifted both programs the opportunity to play on its home turf during regionals. Both teams will play the regional opener and potentially the regional championship next Thursday.

In softball, Free State (18-2) and Lawrence High (3-17) will actually square off next Thursday, with first pitch slated for 4:30 p.m. The Firebirds, who are the defending 6A state champs, won both installments of the City Showdown this year by a combined 25-0 margin. The winner would face the winner of No. 7 Haysville Campus (14-6) and No. 10 Wichita East (5-11) at 6 p.m. Thursday at FSHS.