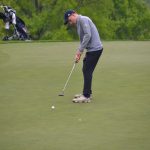 FSHS placed fourth at the Olathe North Invitational Monday afternoon, shooting a 319 team score at the Falcon Ridge Golf Course. Shawnee Mission East (291), Olathe East (297) and Olathe West (315) all finished ahead of the Firebirds in the final leg of the league tournament.

It was enough to help Free State claim a bronze medal in the overall league action with a total score of 956, which marks the team’s highest finish since 2016. Shawnee Mission East (915) won the event, while Olathe East (930) claimed runner-up. Lawrence High finished 12th out of 13 teams with a 1363, which included a 456 and a 12th-place finish at the final leg.

Olathe East’s Daniel Gutgesell was the individual Sunflower League champion, posting a winning score of 224. Free State’s Andrew Park posted the best score among city golfers, carding a 226 to take fourth on the individual leaderboard. Park posted a 75 in the final leg, which was good enough for seventh.

Landon Berquist also shot a 75 Monday, and claimed seventh overall at the Sunflower League Championship with a 230. Dylan Sommer (22nd) and Mitchell Spriggs (27th) joined them in the top-30. Sommer and Spriggs shot 250 and 252, respectively.

Ross Brungardt was Lawrence’s highest finisher in both the final leg and overall. Brungardt took 20th Monday with an 81, which propelled him to 32nd-place finish in league action with a 260 total score.

The Coyotes claimed a wire-to-wire win in the 2019 KCAC Men’s Golf Championship race, which marked the program’s first conference crown since the 1970. The last outright title for the team was actually in 1953.

Houk, who graduated from FSHS in 2015, was the overall individual champion in the KCAC tournament. After finishing fourth in the event last year, Houk posted a five-round total of 73-77-74-76-74 (374) to end up one shot ahead of his teammate.

So much so that he was recognized for his defensive prowess. Pavlyak, who is now a sophomore outfielder at Benedictine, was named to the 2019 Heart Gold Glove Team, as the Heat of America Athletic Conference announced its postseason awards Tuesday morning.

Pavlyak was also named to the all-conference second team for his play this spring.

Despite an early goal, Free State’s girls soccer team dropped a 2-1 decision to Hayden Monday night on the road.

FSHS went into the intermission with an 1-1 tie before surrendering the go-ahead score in the second half. Kenzie Rorabaugh scored the lone goal of the match for the Firebirds. Free State then suffered an 8-0 loss at Shawnee Mission West Tuesday night.