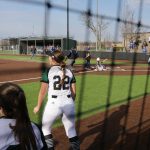 Senior Chloe Taylor (9) slides into home as the Firebirds leap out of the dugout in celebration of a perfect game from Tatum Clopton on Monday, April 2019.

It was a monumental accomplishment for the Firebirds.

Free State’s baseball team and the FSHS softball team won a Sunflower League title in the same year for the third time in school history. They previously did it in 2005 and 2006, the only two years the softball squad has won the league. Not only that, though, the two teams accomplished the feat on the diamond on the very same day.

On Thursday, Free State rolled to an 8-1 win over Shawnee Mission North at home in baseball action. It helped the program secure an outright Sunflower League title. Twenty-seven miles from FSHS, the softball team topped Olathe North for a 6-2 victory to claim a share of the league crown.

That’s why, even though both teams had lofty expectations entering this year, the two league-winning programs understand how special Thursday was for Free State. 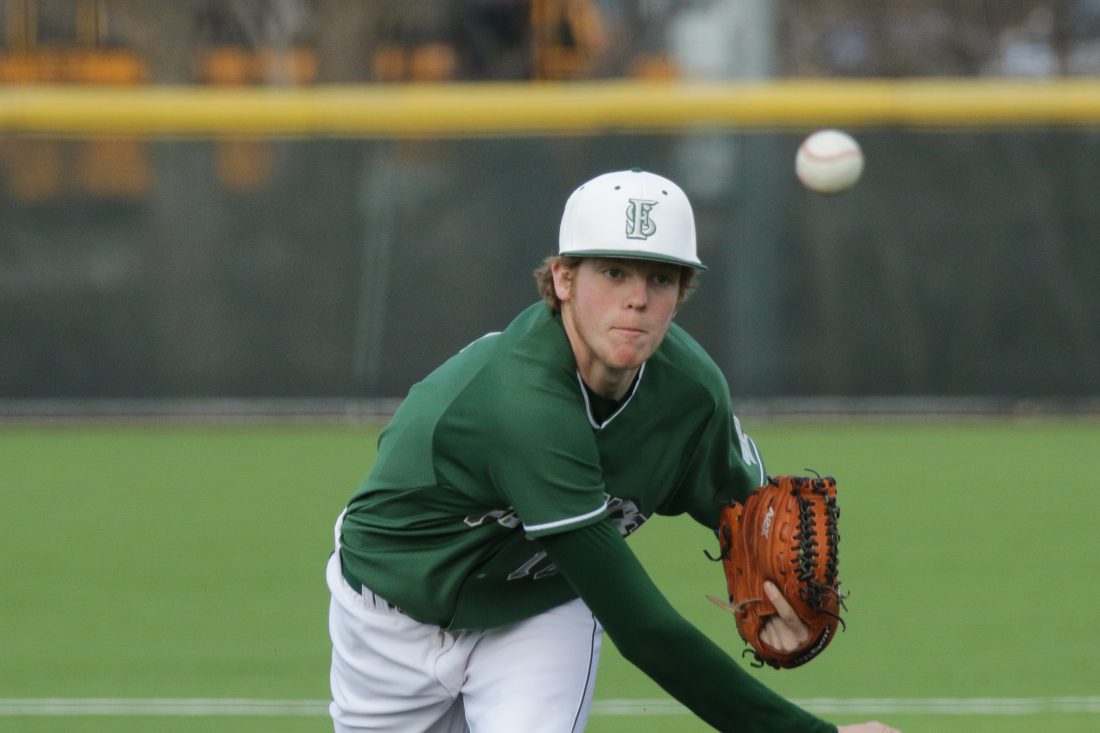 Free State junior David Stuart sends a ball to the plate in a game against Shawnee Mission Northwest, April 2, 2019 at FSHS.

Pitching fueled the Firebirds, who posted a 14-game win streak after dropping the first two contests of the season. Senior Ethan Bradford, a Nebraska signee, was heavily used as a reliever and a starter. Juniors David Stuart and Camden Karlin have also been prolific starters. Senior Jake Zenger has anchored a brilliant bullpen as well.

Free State (No. 1 in Class 6A) only gave up more than two runs in one game during league action.

“Our three starters are all high-quality pitchers and they are supported by talented relievers from the pen. We’ve played solid defensively and done enough with the bats to complement our pitching and defense,” Hill said. “More than anything, we have an outstanding group of seniors, who, like their underclass teammates are highly competitive.”

The softball team, meanwhile, entered the season with championship expectations after winning the program’s first state title in 2018.

After a minor hiccup on April 19, which featured a pair of losses in a doubleheader, FSHS (15-2) has responded with five consecutive wins.

Entering this week, sophomore pitcher Tatum Clopton led the league with a 0.97 ERA and had tossed multiple perfect games. Kay Lee Richardson has matched a school record with seven homers, driving in over 25 runs during her freshman campaign. Georgia Rea, Sara Roszak, Maci Miles and Lauryn Jones have also contributed to a high-octane offense throughout the spring.

Neither team appears satisfied either with postseason play around the corner. Free State softball plays host to Lansing at 12:30 p.m Saturday, while FSHS baseball faces Lawrence at 7 p.m. Wednesday at Hoglund Ballpark.

Members from the Free State and Lawrence High boys tennis teams are head to the 6A state tournament.

Free State qualified three players, as it notched third overall at the regional meet at Harmon Park. Senior Sawyer Nickel punched his ticket with a third-place finish in the singles bracket, entering the state tournament with an 18-7 record.

Senior Trey Melvin and Davis Steadman qualified for the final weekend by notching fifth in the doubles bracket at regionals. The Firebirds duo heads into the state tourney with a 19-7 record.

Senior Cooper Wright and junior Kanak Masten claimed sixth in doubles, improving their record to 21-8 on the year. They will be Lawrence’s lone representatives at the state tournament.

The 6A state tennis tournament is slated to take place at the College Boulevard Activity Center next weekend.

It took a collective for the Lawrence High baseball team to record a 4-0 win over Park Hill Friday night at LHS.

The Lions (14-5, No. 7 in Class 6A) scored one run in the first, two runs in the fourth and one in the fifth. Garrett Romero and Carlos Vasquez tallied the team’s only two hits. Vasquez and Caleb Mondi were each credited with a RBI.

Jackson Hewins, Chris Ritter and Hank Dobson combined to pitch the shutout. The trio allowed four hits, striking out two batters and walking four. They threw 57.3% of their 110 pitches for strikes in the win.

Another win for Will Hedges

Bishop Seabury freshman Will Hedges placed first in a weather-shortened tournament at West Franklin. Hedges shot a 38 in the nine-hole event, beating the runner-up by one stroke, out of the 30-golfer field.

Bishop Seabury will play in the 2A regional meet on May 13 in Fort Scott.