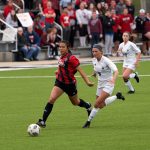 Lawrence High senior Anna Chieu (13) drives the ball down the field as Free State senior Brittany Hoffman (9) defends during the City Showdown Friday night at LHS on May 3, 2019.

As soon as the soccer ball touched the back of the net, Lawrence High senior Anna Chieu sprinted toward the student section.

Lawrence head coach Matt McCune joked afterward “that it was faster than she ran all game.” The rest of Chieu’s teammates followed her to the fans at the edge of the bleachers, creating one massive mobbing in the moments following a 5-4 overtime win over Free State Friday night at LHS.

Chieu’s golden goal capped a thrilling installment of the latest City Showdown. And McCune painted the whole scene before the free period even began.

“We talked about it before overtime,” McCune said. “I said, ‘Anna has four goals, she’s going to get five. I don’t care if it is her, it can be somebody else. But if you score that goal, you are running over to that crowd over there.'”

But the fact that the Lions were even in that position in overtime was a testament to their perseverance late.

Free State senior Emma Yackley gave her team a 4-3 advantage with 17:15 remaining in regulation. She delivered a strike from 20 yards out, despite defenders being draped all over her. It soared to the left side of the net, as she tumbled to the turf to finish off a hat trick.

McCune wasn’t worried, however. Considering how back-and-forth the match had been, he immediately hollered out that his team would get another chance. LHS (6-8) did just that seven minutes later, when Chieu had a breakaway and fired a perfect kick to the left side of the goal from the right side of the field.

It evened the score up at 4-4, though Chieu was far from finished. After getting stopped by Free State senior goalkeeper Kaelynn Weiss early in overtime, Chieu took advantage of a scrum to deliver the decisive blow.

Her goal goal came with 2:03 left in the first overtime, and was her fifth score on the night. It marked the second time this season that Chieu recorded five scores in a match.

“I just happened to be at the right place at the right time,” Chieu said. “This was one of our better team games. I don’t think I have could scored five goals without my teammates.”

It was a fitting end to tightly-contested match, as FSHS (2-9-2) and LHS traded punches all night in a game that was originally scheduled to take place this past Wednesday.

Chieu notched the first two scores of the contest, the second of which came via a header and a perfect assist from junior Banner Williams. With 25:54 left in the first half, Yackley got the Firebirds on the scoreboard with a nifty move through traffic and a laser from 25 yards away.

FSHS senior Brittany Hoffman evened things up with a penalty kick to erase an early deficit. Yackley launched a ball over a LHS wall on a free kick, which ultimately tucked under the post, to give the Firebirds a 3-2 lead early in the second half.

Just four minutes later, Chieu powered her way through the Free State defense to knot things back up with her third score.

“Fans got what they paid for,” McCune said. “It was a fun one to watch.”