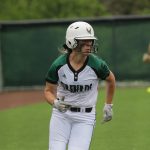 Free State sophomore Georgia Rea rounds third to score in a game against LHS, May 1, 2019 at FSHS. Free State won 13-0 in five innings.

“You can’t ruin a perfect game like that,” Ice said.

Instead, Clopton, who had retired 12 batters on 37 pitches through the first four innings, went back out to the circle to put the finishing touches on her third perfect game of the season.

Clopton struck out nine of 15 batters in the five-inning game, throwing just two balls in the first three innings. She went on to throw less than 50 pitches all game.

The Free State defense came prepared for an LHS team that knew it would have to get on base and use its speed to have a chance. To start the game, Lawrence senior Abby Monroe laid down a bunt, but FSHS senior Lauryn Jones came down the third base line to throw the ball down to Maci Miles at first base.

“When it comes to the batters hitting it, we know where it’s going to be,” Rea said. “We have great communication. Me and LJ (Lauryn Jones) being on the corners, me and her definitely know and respond well to each other when teams play small ball.” 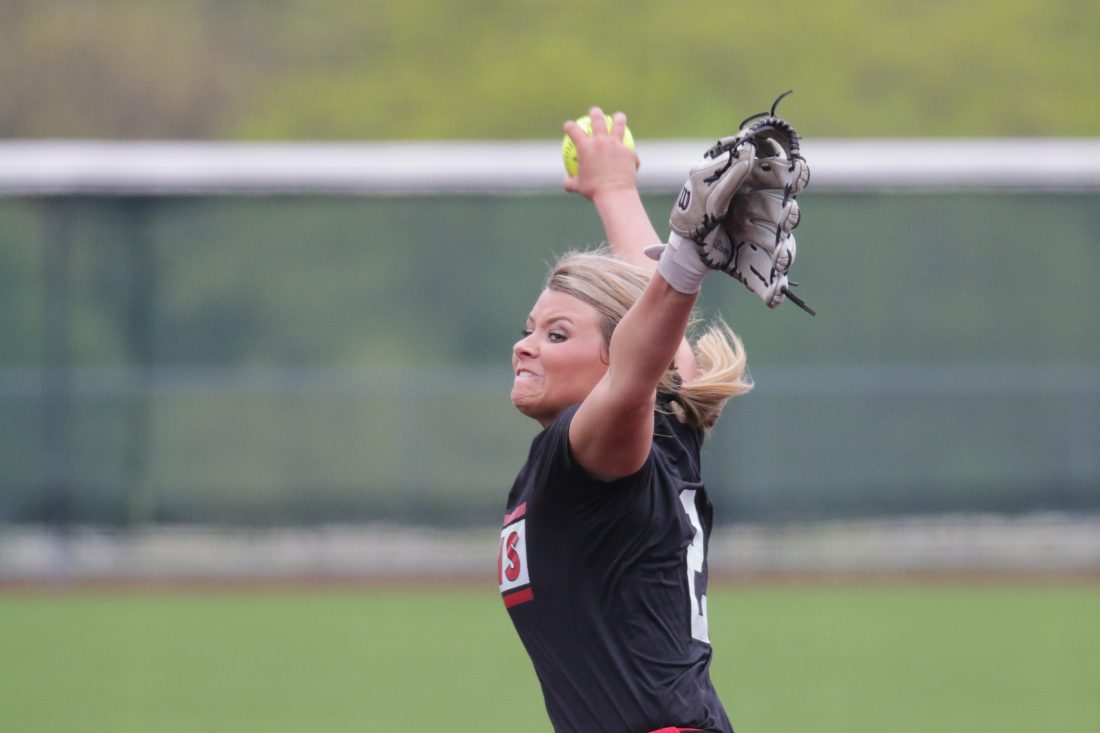 Lawrence High pitcher Kaylee McNish throws a pitch in the third inning during a game against Free State, May 1, 2019 at FSHS. The Firebirds won 13-0 in five innings.

At the plate, Miles and Kay Lee Richardson each finished 2 for 3 with 3 RBIs. Richardson scored the fourth run of the game with a home run to right center and Miles delivered a two-run double in the third inning.

Leading off, Rea and freshman Jasmine Brixius reached base in each of their at-bats, scoring each time. Ice subbed out four fielders to start the fourth inning, with Robin Todd, Riley Hall, and Karsen Jacobson each getting at-bats.

Six of the Lions (2-14, 2-12) were able to make contact against the standout strikeout pitcher.

Senior Sammy Williams and Victoria Droge made contact in each of their at-bats. Karly Johnson stopped five balls at shortstop and Abby Monroe made five putouts at first.

Angelina Harjo pitched in relief of Kaylee McNish and stopped the Firebirds’ two-out scoring rally in the fourth inning. Harjo finished the game by retiring the side in the fifth inning, allowing two hits.

“It’s a rivalry game so we always want to do the best we can, we’ve got to put the ball in play and make outs for the pitchers,” Monroe said. “We’ve got four more (games), so we’re just trying to finish the season strong and win as many of those as we can.”

The Firebirds (14-2, 14-0 Sunflower League) will travel to face Olathe North at 5:30 p.m. on Thursday, when a win will guarantee them a share of the league title.

Lawrence travels to Shawnee Mission East at 5:30 on Thursday as well.