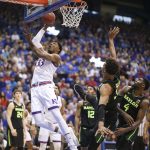 Kansas forward David McCormack (33) puts in a bucket during the first half, Saturday, March 9, 2019 at Allen Fieldhouse.

On a day when recent Oscar winner Kevin Willmott was honored on the court during a timeout at Allen Fieldhouse, Kansas coach Bill Self turned to a legendary Hollywood actress to describe the current state of his team following a 78-70 victory over Baylor in the regular-season finale for both teams.

“I mean, it’s ’50 First Dates.’ Drew Barrymore could star with our team,” Self said following Saturday’s victory. “It’s something new every day.”

The Jayhawks latest victory, which capped off a 17-0 season inside Allen Fieldhouse, certainly backed up Self’s claim, with freshman David McCormack leading the Jayhawks’ offense for the first 20 minutes.

Fresh off of a career-high 18 points in a Tuesday loss at Oklahoma, McCormack scored 12 more on Saturday, with 10 of them coming in the first half.

The bruising 6-foot-9 forward from Norfolk, Va., scored the first two of the game for Kansas on a monster dunk over two Baylor players after a nifty extra pass from Ochai Agbaji (6 points, 8 rebounds and 4 assists) underneath.

That merely set the tone for McCormack’s assertiveness and the one-time reserve who has started the past eight games for the 13th-ranked Jayhawks (23-8 overall, 12-6 Big 12) scored three times from the post and grabbed five tough rebounds on a day that Self said would have to be “the most aggressive we’re going to play the whole year.”

“He played terrific,” Self said of McCormack. “I should’ve played him more. He was our best offensive player the first half and made some good strong moves. … I thought he was really good.”

While McCormack’s size and frame position him well to attack just about any player an opposing team can throw at him, it’s learning how to play alongside KU’s leading scorer, Dedric Lawson, that has helped the KU freshman reach a new gear.

During the past month, and even more so during the past couple of games, the chemistry between KU’s two starting big men has become automatic.

Lawson, who tallied 23 points and 14 rebounds Saturday and closed the regular season averaging a double-double of 19.1 points and 10.6 rebounds per game, draws a crowd every time he moves into the paint, and McCormack is starting to find space around him to make opposing defenses pay.

“In practice, we mix up the teams and stuff so me and Dave have been playing a lot with each other so we’re just getting that chemistry of playing together in practice,” Lawson said after Saturday’s win. “Finding Dave around the rim, he’s a big body and he’s got a great touch. Most of the time you throw it to him, he’ll finish, so I try to get him in areas where he can be the most productive.”

Asked what has been the biggest reason for McCormack’s recent surge, Lawson needed little time to formulate an answer.

“He’s just playing with confidence,” Lawson said. “He’s being patient. They’re not really doubling him and he’s just taking his time and making his move.”

Added Self of his two big men playing together: “David definitely benefits from Dedric’s presence, without question.”

After averaging just 6.4 minutes per game during KU’s first 10 Big 12 games this season, McCormack’s usage has skyrocketed to 16 minutes a game during the final eight.

The KU freshman said being more comfortable on the floor and having the game slow down both have benefited him during his run in the starting lineup. But whether he’s starting or not, McCormack’s mentality has and always will be to take advantage of every opportunity he gets.

Asked what message he has received from Self during recent days, McCormack said the agenda has not changed.

“Just to keep working, keep having a great mindset, keep working hard. Just doing your job and do what you can to help the team,” he said. “(Self) always wants more.”

That same message could have applied to the entire Kansas team on Saturday.

After building a 32-29 halftime lead, the Jayhawks ripped off a 6-0 run to open the second half. McCormack’s tip-in at the 19:37 mark got it going. Seconds later, a monster block reminiscent of one that might come from someone named Azubuike, Withey, Aldrich or Embiid, further put the Bears (19-12, 10-8) in a hole and inspired Kansas to take complete control.

Less than two minutes later, on a putback by Lawson, the Jayhawks’ lead grew to 11 and Kansas spent most of the second half protecting that type of margin.

Baylor made its runs, closing to as few as 5 or 6 points on a couple of occasions, including a 72-66 deficit with 2:35 to play, but Kansas always had an answer.

Most of the time it was Lawson, who hit 11 of 12 free throws in 36 minutes. But Quentin Grimes (9 points, 5 assists in 22 minutes) and Marcus Garrett (7 points, 3 assists, 2 steals in 27 minutes) both hit key 3-pointers in front of the Kansas bench to help the Jayhawks maintain control.

For a team that spent the entire season trying to avoid giving away its leads, none of what transpired in the final 20 minutes came as much of a surprise, including the final result.

“It’s hard to come back on Kansas here,” Baylor coach Scott Drew said after the loss. “We’ve done it a couple times, but it’s really hard to do. (They’re) too well-coached.”

Asked how he felt about his team heading into postseason play, Self said he was neither “in love with” how the Jayhawks were playing nor “ultra-concerned with how we’re playing.”

And then that whole “50 First Dates” analogy came back into play.

“I don’t really know what to expect,” Self said. “But I’m excited to see whatever happens. I still think there’s a level we can get to that we haven’t got to yet, so, you know, hopefully we’ll peak at the right time.”