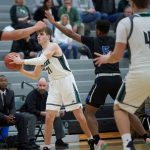 It would have been easy to call this a rebuilding year for the Free State boys basketball team.

After all, the Firebirds lost nine seniors from last year’s squad that went to its first state championship game in program history. Noah Butler is the only returning player that scored in that game, as Free State was forced to reload with several players that competed at the junior varsity level last season.

FSHS Sam Stroh still always felt his team was capable of returning to the 6A state tournament, and that has become the standard since he took over the program before the 2015-16 season.

“Anytime you lose a group like that from last year, the rebuild will always be tough,” Stroh said. “The expectation is that we belong in Wichita if we do the right thing, put in the hard work and play as a team.”

The Firebirds (15-6) did just that by recording a 60-55 win over Derby in the sub-state championship to net their third consecutive trip to the 6A state tournament. Free State earned the No. 8 seed and will face No. 1 Washburn Rural (21-1) at 6:30 p.m. Wednesday at Wichita State University.

It wasn’t always easy, however. There were some growing pains as players adjusted to playing at the varsity level, especially in a tough Sunflower League that sent four teams to the 6A state tournament this season.

Yet, that’s exactly what helped the battle-tested Firebirds when things got tough in the postseason. In the sub-state championship, Free State trailed by as many as 9 points before clawing its way back by notching eight consecutive stops.

“We have had our ups and downs this season, but I think that might have benefited us,” Stroh said. “When it got rocky in the fourth quarter, I didn’t see guys quit or put their head down. They found a way to win, and that says a lot about these kids.”

But that’s just the brand of basketball Free State has played with in the four years with Stroh at the helm. The Firebirds are resilient on defense, and they can handle any late-game situation.

More importantly, that’s the case at nearly every level within the FSHS program. And it allows for players to answer the call when it is time to step on the floor in a varsity game.

Junior Olin Yoder hit a pair of second-half 3-pointers in a road win over Mill Valley on Feb. 4. He had only played in one varsity game before Stroh called on him with the game on the line. Junior Alyus Wisdom earned his first start in the sub-state opener, and then proceeded to score 10 points within the first 10 minutes to help FSHS roll past Junction City.

“They aren’t scared, they are just out there playing basketball,” Butler said. “We always knew we could get back to state. We have always been the underdogs, and I love proving people wrong.”

Even players in their first year with the program have an understanding of what to expect. Freshman Mozae Downing has started every game this year at point guard, and converted on a crucial and-one down the stretch against Derby.

“You have to live up to that standard,” Corcoran said. “Mozae never played with Garrett (Luinstra), but he feels like he has to play like Garrett everyday. He has to live up to his expectations.”

Still, that’s an example of why one of the team’s slogans, “Created by Culture,” carries so much weight throughout the program. Every player wants to maintain Free State’s recent success, and last weekend was an example of that.

It is the reason a team that lost nine seniors was able to prove everyone wrong by returning to the final tournament of the season.