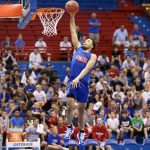 Kansas guard Devon Dotson cruises in for a layup during a scrimmage on Tuesday, June 11, 2019 at Allen Fieldhouse.

It is never too early to make predictions regarding the Kansas men’s basketball team. Forecasting the team’s leading scorer is something fans and reporters start doing before the previous season is even over.

The Jayhawks have plenty of production returning from last year’s team that finished third in the Big 12 conference before eventually falling to Auburn in the second round of the NCAA tournament. Kansas returns 55.2 percent of its minutes from a team that featured a talented group of freshmen.

Bart Torvik, who operates a website much like KenPom for analytical purposes, is one of the few prognosticators that already has his projections accessible to the public. His projections rank Kansas as the third-best team in the nation, trailing only Michigan State and Florida.

Perhaps the most interesting feature about Torvik’s website at this point in the offseason, though, is the fact he has a top-10 projected contributors for each team. As a result, I thought it would be fun to go over what he has projected for Kansas.

Before revealing his numbers, it is important to note that this is one system and it is constantly being updated this offseason. I’m sure different prognosticators, if they chose to have this feature, would have different results as well. Torvik even said on Twitter in late June that Kansas is hard for the algorithm to accurately project minutes.

That being said, it is only July and there is not much else going on. Why not get into Torvik’s statistical projections for the Jayhawks? 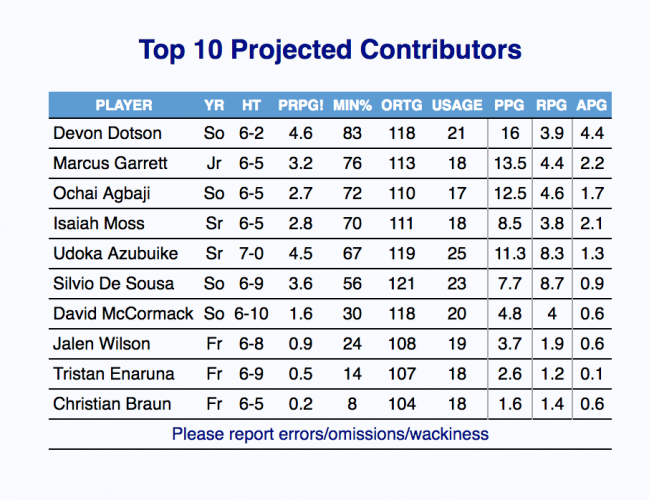 Before even looking at the numbers, Dotson might have been the pick to lead Kansas in scoring this upcoming season.

What Dotson did as a freshman point guard last year was incredible. Dotson, who started all 36 games, averaged 12.3 points, 3.7 rebounds and 3.5 assists per game while playing an average of 32.4 minutes per contest. Dotson was named to the All-Big 12 third team in his first collegiate season.

If Dotson can shoot better than 36.3% from long range, it is safe to assume he will take a big leap this year. Dotson flashed superb speed and an uncanny ability to get to the rim. Dotson made 61.3% of his 168 shots at the rim last year, which was a better clip than what Frank Mason III accomplished during his senior season when he converted 56% of his 191 attempts at the rim.

Dotson’s projections could be inflated given that Torvik’s algorithm does not include production from backup point guard Issac McBride. Still, Dotson as KU’s leading scorer would be my bet.

Look at that balance.

It is not a new concept for a Bill Self-led team, of course, especially one as talented and deep as this year’s roster appears to be. Last season, though, Dedric Lawson and Dotson accounted for nearly 42% of KU’s scoring.

Torvik’s projections suggest that Kansas will have more balance this season, which could be a problem for opposing teams. Marcus Garrett (13.5), Ochai Agbaji (12.5) and Udoka Azubuike (11.3) are all projected to average double figures along with Dotson.

Garrett’s offensive boost is especially noticeable, though that may be due to McBride’s absence. Garrett is projected to play 76% of the minutes, which is the second-highest clip on the team. While Garrett will certainly have to be on the court due to how much he can impact a game in other areas, some of those minutes are probably from him filling in at point guard.

Regardless, KU should have more balance this season and multiple players will have their opportunity to shine.

When Azubuike announced he was coming back for his senior year, it was no secret that he was going to be a big part of KU’s offense.

These projections support that theory, as Azubuike leads Kansas with a 25.0 usage rating. In late June, Torvik tweaked his projections algorithm to implement a minutes dampener for guys who foul a lot. That led to Azubuike’s minute percentage to be at 67%, which is fifth on the team.

Azubuike will be a focal point of KU’s attack when he’s on the floor. In fact, he registered a 28.2 usage rating in the nine games he played last year. It still remains to be seen if Azubuike can be as efficient if he’s ultimately given less minutes.