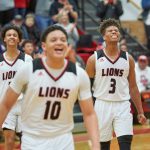 Lawrence High Lion's Clarence King (3) screams with excitement with Mayson Quartlebaum (10) and Zeke Mayo (2) after their win over Garden City at the KSHSAA Sub-State tournament at Lawrence High School on March 1, 2019.

Before the second session even began, Niko Roberts was thinking of improvements.

Roberts, who was a member of the Kansas men’s basketball team between 2010-14, held an administrative role at the first-ever NCAA-sponsored College Basketball Academy.

This past week, the academy took place at four different university campuses (UConn, Illinois, Houston and Grand Canyon) and featured two different sessions at each location. Roberts was located in Houston, which was for members of the South region.

“I think it went really well,” Roberts said. “The kids have had a great experience and that’s our main goal here. We want it be educational, we want it to be a competitive atmosphere and so far that seems like what we have had. It is a lot of trial and error to figure it out, but I think it has gone relatively well.”

Roberts has been involved with this academy from the very beginning, so he has had a lot of responsibilities since he was assigned it since August. Roberts helped develop a feature online that allowed coaches to nominate players for this camp. He was involved in setting up guest speakers for life skill presentations, while being involved in other areas of the camp.

At the academy, Roberts made sure the camp was running smoothly. He assisted players, parents and coaches throughout the process. Roberts estimated that they had over 160 players at the first session in Houston, competing in drills, games and participating in life sessions.

This new camp initiative was created as part of the NCAA’s recent reforms to college basketball. All expenses for participants and one chaperone were paid for by the NCAA.

“A lot of these guys have never been on a campus as big as Houston,” Roberts said. “They are really getting the college experience. You walk into life skills like you are walking to class. Going to drills like you are going to practice or going to games like you do in college.”

In order to attend the camp, coaches had to nominate high school players. Most players were soon-to-be juniors or seniors, but select sophomores were also allowed to participate in the camp.

Two Lawrence High standouts were among the players in the first session at the University of Houston earlier this week. Junior Zeke Mayo and senior Mayson Quartlebaum were there for three full days.

A typical schedule for the players featured breakfast at 7 a.m. before they walked over to the rec center for stations. After stations, they ran through specific game situations and then did extra skill work. Following that, players attended life skill classes to hear from guest speakers. The afternoon then usually featured multiple games.

“I thought it was really beneficial,” Quartlebaum said. “Now I’ve seen how it is going to be in college, so I’ll be more accustomed to it.”

It certainly proved to pay off for Quartlebaum, who received his first collegiate offer after the event. Quartlebaum returned home Thursday, and announced via his personal Twitter account Friday afternoon that he received an offer from Kennesaw State University.

“It was definitely a good experience,” Mayo said. “They took us through a whole college setting morning through night. That was the main thing for them to help us improve not only as a basketball player but as a person.”