Perry Ellis injured early, Self Made suffers lopsided loss in opening round of TBT 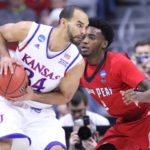 Self Made was forced to face reality within the first minute of this year’s TBT tournament.

Despite being a No. 3 seed, and the ninth-ranked squad in the entire field, the Kansas alumni team never led in an eventual 87-63 loss to sixth-seeded Sideline Cancer during the opening round of the TBT tournament Thursday night at Wichita State’s Koch Arena. It was an abrupt ending during Self Made’s first year in the event.

The Kansas faithful in the crowd were surprisingly quiet for much of the night, as Self Made faced two different double-digit deficits within the first 14 minutes of the contest. Sideline Cancer advances to the second round in the $2 million, winner-take-all tournament.

Given what Self Made players accomplished in their collegiate career, the Kansas alumni team had much bigger aspirations entering the tournament.

“All you have to know about Self Made is every single player playing tonight, won a Big 12 title every year they played for Bill Self at Kansas,” ESPN color commentator Fran Fraschilla said on the broadcast before the game began. “This is a well-oiled machine, almost all of these guys are still playing at a high level overseas.”

But while members of Self Made are familiar with winning big games, it was evident early that this night was going to be different. That message was made clear just a mere 58 seconds into the contest.

Perry Ellis, a Wichita native, sustained a knee injury on one of the first possessions of the game. Ellis, who recently signed a contract for a team in Japan, had to be helped to the locker room.

Later in the first half, Jen Hale of ESPN reported that Ellis had been taken to a medical facility in Wichita to check out his right knee.

“We are just praying for Perry, hoping it is not as bad as it seemed like it was,” Self Made head coach Brady Morningstar said during his interview with Hale just before the second half. “I think all of our thoughts are with him right now.”

Kansas head coach Bill Self also portrayed his concern for Ellis during his own halftime interview on ESPN.

“Unfortunately, the biggest concern we have right now is what’s up with Perry,” Self said. “I don’t even know if Perry has stepped foot on this court since his high school days. To see him go down like he did, just hope for the best and everything.”

The early injury prevented Self Made from getting into any sort of rhythm Thursday night. Sideline Cancer jumped out to a 16-6 lead by the 2:33 mark in the opening quarter, which forced Morningstar to call a timeout.

Members of Self Made then showed a glimpse of what could have been following the timeout. The Kansas alumni team pulled within one possession in just 30 seconds via transition dunks, which was reminiscent of their glory days in Allen Fieldhouse.

Elijah Johnson, who was the general manager of the team, started things off with a triple from the left wing. On the very next possession, Travis Releford slammed home a dunk off a lob pass from Jeremy Case. Releford then forced a turnover, firing an alley-oop pass to Kevin Young in transition.

Another steal led to one last flush when Young launched a cross-court pass to Releford, who capped the first quarter off with a slam to pull Self Made within one point. Sideline Cancer, however, responded by stretching their lead back to double digits midway through the second period, and the game was never in doubt after that.

Mario Little paced Self Made in scoring with 21 points on 7-of-15 shooting, including 16 points in the second half when the game was out of reach. Young, who filled in admirably for Ellis, finished with 14 points. Tyshawn Taylor was the only other player to notch double figures, as he scored 10 points.