Why Les Miles might bring stability at QB for Kansas football 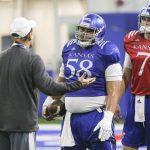 Only two teams will be bringing a quarterback to Big 12 Media Days next week.

Kansas obviously was not going to be one of those programs, though it is surprising to see how few signal callers will be in attendance. KU head coach Les Miles has yet to name a starter, and he does not have to commit to one player under center anytime soon.

At the conclusion of spring ball, however, Miles did admit that Thomas MacVittie has a slight lead on the battle to be KU’s starting quarterback.

“I think there is a real quality group there. I think MacVittie might have an edge. Carter Stanley is right there,” Miles said. “From that point forward, there are some good guys that can step in and play well in games. I’m not really ready to name anybody.”

A quarterback competition is nothing new with KU, especially during this decade. But understanding Miles’ historical background with signal callers might put fans at ease this time around.

Similar to what I did with the running back blog earlier this week, I went back to collect data from quarterbacks under Miles during his time at Oklahoma State and LSU. The thing that initially stood out to me was the lack of production backup quarterbacks have had under Miles.

In his last full season as a head coach, which was 2015, a single quarterback threw every single one of LSU’s 277 pass attempts. In fact, you have to go all the way back to 2011 to find a backup quarterback that threw more than 45 passes in a single season with Miles at the helm.

For comparison, KU’s backup quarterback has thrown more than 45 pass attempts in each of the previous seven seasons.

What does that mean exactly? Well, it appears that Miles will commit to his signal caller when he picks a winner of the starting quarterback competition. That alone could provide some much-needed stability to a program that has been the lowest scoring offense in the Big 12 in eight of the previous nine seasons.

The only year that KU did not finish last in the league in scoring this decade was actually 2018, when the team averaged 23.8 points per game. Peyton Bender played 11 games and threw 321 pass attempts, while Stanley threw just 47 attempts in four games.

Yet that could resemble what this year’s passing numbers look like, given how Miles has typically operated in his career.

During his 15 full seasons as a head coach, Miles has only had three backup quarterbacks throw at least 75 pass attempts in one year. The Jayhawks have had six such No. 2 signal callers do that in the previous nine seasons.

All of this could be a pointless exercise, especially during the first year with Miles at the helm. He did not recruit Stanley or Miles Kendrick, and might not be as likely to give either of them a long leash if they emerged as the starter by August. Injuries could also play a factor at any point.

Still, Miles’ track record would suggest he’s more likely to stick with one quarterback. Considering these last several years, that mindset could be a step in the right direction for this football program.