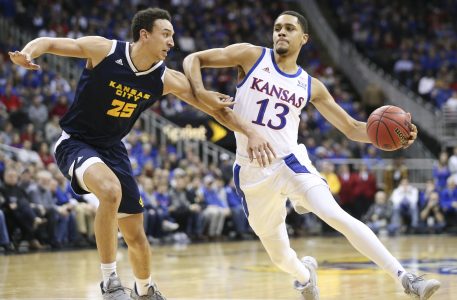 With 12 games worth of lessons now in their memory banks, Kansas basketball freshmen Christian Braun and Tristan Enaruna have reached the first true checkpoint of their college careers.

The nonconference season is now a thing of the past — save for a date with Tennessee in late January during the Big 12/SEC Challenge — and it’s nothing but Big 12 Conference battles from this point forward.

Don’t think for a second that either player will be gun-shy going into what the Jayhawks typically refer to as “the second season.”

“Definitely ready for that,” Enaruna said after KU’s 72-56 win at Stanford on Sunday. “It’s going to be exciting.”

The Jayhawks open Big 12 play at home against West Virginia at 3 p.m. on Saturday. And after spending the past eight weeks figuring out their roles and taking inventory on what works, what doesn’t and how the Jayhawks want and need them to play, Braun and Enaruna believe they’re prepared for the step up in intensity that’s just around the corner.

“I think we’re ready,” Enaruna said. “I think there’s a whole lot more to learn, but the main thing we took away from this nonconference (schedule) is just the experience and getting used to playing on these types of stages and just playing with the guys and being coached by coach.”

Enaruna stepped into the rotation first, flashing his defensive potential and easy-going offense during the first few weeks of the season.

But it’s Braun who appears to be riding the bigger wave at the moment.

Having put together three strong outings in a row in wins over Kansas City and Stanford and KU’s loss at Villanova, it’s the 6-foot-7 guard’s confidence that his coaches and teammates have noticed most in recent weeks.

“I’m excited about him,” KU coach Bill Self said of Braun. He still looks hesitant to me in some ways, but he didn’t look hesitant shooting the ball (against Stanford on Sunday).”

In 19 minutes against the Cardinal, Braun knocked in 3 of 4 shots from 3-point range and also showed off the tenacity and hustle that teammates and coaches have raved about since the summer.

But it wasn’t just the fact that Braun drained a career-high three triples against the Cardinal that mattered most. It also was when those shots came.

Two of them squashed Stanford runs and kept the momentum on KU’s side. And the third gave the Jayhawks an 18-point lead with 7:13 to play.

“I think I’m getting more comfortable each game,” Braun said after Sunday’s win. “And my teammates are helping me out, getting me more comfortable (and allowing me) to do what I normally do and what I’m used to doing.”

As a shooter and while crashing the offensive glass, cleaning up the defensive glass or hustling behind the play, Braun appeared more comfortable than ever and found his production from playing hard.

“That’s kind of what he does, what he’s good at,” Enaruna said. “Just playing hard, hustling, stealing extra possessions and being on the defensive glass a lot. I think he was really good. You know, you could really see his confidence today with a couple of shots he made, and that’s good to see. It’s good to see that he’s growing.”

When Braun plays with confidence, good things tend to happen. And when good things happen, his teammates make sure to feed that confidence.

“The biggest thing we tell him is that we need him to knock down shots, him and Isaiah (Moss),” junior guard Marcus Garrett said of Braun. “Those are our 3-point shooters and we have to show confidence in them for them to be able to make those shots. So every time they’re open, we tell them to shoot the ball.”

The two KU freshmen are comfortable with their place on this team right now. And both are playing with the most confidence they’ve had this season.

“I’m pretty positive on that,” Enaruna said with a smile.