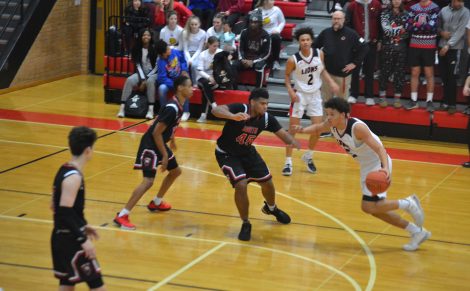 Lawrence High senior Mayson Quartlebaum drives to the basket during a game against Shawnee Mission North Friday night at LHS on Dec. 20, 2019.

If the first month was any indication, this is going to be a fun basketball season for the area boys teams and players.

Lawrence High and Eudora both made it to the championship game of their respective midseason tournaments. Free State also came away with some hardware, finishing third in a tough field. Bishop Seabury, the only No. 1 team in the area, is off to a 2-0 start after a convincing win just before the break.

As a result, many area players are off to a strong start this year and are worth recognizing before the season gets back in full swing in January. It was not easy narrowing this list down, but let’s take a look at some of the top players from the first month of the 2019-20 basketball season:

Ramirez was pegged as a breakout candidate entering his sophomore season, but this start is even better than expected. He was named athlete of the week after scoring 28 points in the season opener. Ramirez proceeded to follow that up with 26 points and 12 rebounds against Christ Prep, marking his second double-double in as many games.

If Ramirez can keep this pace up, the Seahawks (2-0, No. 1 in Class 2A) are in for a big year. Bishop Seabury advanced to the Class 2A state tournament a year ago and has the pieces for another deep postseason run this winter.

It was impossible to pick just one player from LHS, which is 3-2 (1-0 in Sunflower League) and ranked No. 9 in Class 6A entering the 2020 portion of its schedule. Senior Mayson Quartlebaum and Zeke Mayo have both scored in double figures in all five games for the Lions, who also finished as a runner-up in the Blue Valley Shootout.

Mayo, the team’s only returning starter, scored 26 points in the championship game of that tourney and also had 22 points in the season opener. Quartlebaum came off the bench last year but has emerged as a top weapon this season. Quartlebaum, a Kennesaw State signee, has thrown down multiple emphatic dunks already and scored at least 17 points on four different occasions as well.

After every game, it is not hard to find Rau’s name on the box score. As expected, the junior playmaker has filled up the stat sheet for the Eagles during their 4-3 start to the season. Rau has flirted with a triple-double in nearly every game. He has scored at least 17 points in all but two contests. Rau has collected nine-plus rebounds in all but one game, while recording at least seven assists in five of his seven outings.

For the season, Rau has scored a total of 108 points to go along with 61 rebounds and 52 assists. That total line equates to an impressive average of 15.4 points, 8.7 rebounds and 7.4 assists per game. The Eagles, who have played in four consecutive KCAA State Championship games, will continue to lean on Rau after the break.

Through four games, Yoder has emerged as a knockdown shooter for the Firebirds. In the Hays City Shootout, Yoder had three double-digit performances in as many games during Free State’s run to a third-place finish. He drilled a total of 11 3-pointers, including five in the semifinals, during the tournament.

Yoder’s streak of double-digit scoring performances was snapped in the Sunflower League opener, but watch out for his ability to get hot from deep this year. Yoder is averaging 2.75 triples per game to go along with 47 total points through four contests. As a team, Free State is 3-1 (1-0 in Sunflower League) and ranked No. 7 in Class 6A following the first month of the season.

Abts earned athlete of the week honors after helping his team reach the championship game of its own tournament. Abts, a junior, hit a trio of 3-pointers to help Eudora push past Olathe Northwest in the semifinals of the Cardinals Invitational. EHS (No. 7 in Class 4A) ultimately lost to JC Harmon (No. 5 in Class 6A) in the title game, but the tourney was a promising showing by Eudora so early in the season.

In addition, the Cardinals have had a few other players responsible for their strong start. Senior Noah Watkins has managed to draw 10 charges already, while Jacob Merkle and Brett Breedlove have been effective on both ends of the court.