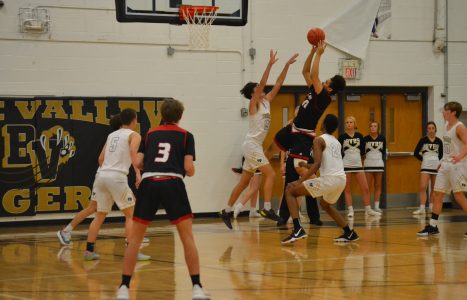 It has been a busy start to the basketball season, which is a good thing.

Multiple area basketball teams got some much-needed game action last week in midseason tournaments. It gave those respective teams a better idea about ways to improve before the start of the new semester.

While many area squads still have at least one game left before winter break, let’s take a look at a few things that we learned during the first set of midseason tournaments:

Lawrence High’s boys basketball team was once again in the Blue Valley Shootout during its tourney before break. The Lions even made it to the championship game for the third year in a row.

Unlike last year, though, LHS was unable to secure the tournament title. Lawrence dropped a 63-62 decision to Olathe South in overtime, even though it led by 8 entering the fourth quarter. Still, it was interesting to watch this inexperienced group grow last week.

The Lions (2-2, No. 9 in Class 6A) cruised in the opening round behind a strong defensive effort, and they claimed a narrow win in the semifinals. Many of the players responsible for the team’s deep run didn’t have much varsity experience entering this year.

Senior Bryce Johnson netted a game-winning putback in the final seconds against Blue Valley in the semifinals. Senior Peyton Mallory drilled three consecutive triples in the final minutes of that same game. Senior Mayson Quartlebaum, who came off the bench last year, dominated both ends of the court throughout the event.

Junior guard Zeke Mayo was the team’s lone returning starter, but his 26-point outing in the title game showed that he can be Lawrence’s go-to option when necessary. With several players embracing bigger roles with ease early on, the Lions have the potential to make another deep postseason run.

The Firebirds (2-2) were only able to walk away from the event with one win, but there were signs of improvement by the end of the week. Free State is becoming more comfortable with the new system and was even able to throw different looks at opposing teams.

At one point, FSHS employed a full-court pressure defense against Blue Springs (Mo.) and it led to a 10-1 run to close out the first half.

Junior Shannon Clarke was the only Firebird to score in double figures in all three games, posting an average of 18 points per game at Olathe East. Clarke recorded a pair of 20-point performances and was able to score in a variety of ways all week.

Watch out for Eudora boys

It is hard to put too much stock in preseason rankings, and that really goes for any level and any sport. So much unexpected things can happen over the course of a given season.

That brings us to the Eudora boys basketball team, which actually entered the season ranked No. 8 in Class 4A. The Cardinals lost a ton of production from last year’s team that went 11-9, so it was hard to properly gauge if that ranking was fair.

After a trip to the title game in its home tournament, the Eudora boys can be one of the top-10 teams in Class 4A this year. The Cardinals toppled KC East and Olathe Northwest before falling to JC Harmon (No. 8 in Class 6A) in the championship game.

Eudora (2-2, No. 8 in Class 4A) has a balanced attack this year with several upperclassmen stepping into bigger roles. Junior Ty Abts, junior Jacob Merkle, senior Brett Breedlove, senior Noah Watkins and senior Justin Fawcett were all key producers for the Cardinals last week and should continue to be for the rest of the season.

EHS girls will be versatile

A third-place finish at the Paola tournament was significant for the Eudora girls basketball team.

The Cardinals went 2-1 in the event, with their lone loss being to the second-ranked squad in Class 4A. Kansas City Piper, which was a runner-up in Class 4A last year, handed EHS its first loss of the season with a 36-26 decision in the semifinals.

But EHS (3-1, No. 7 in Class 4A) bounced bounced back to defeat Wellsville in the third-place game.

Perhaps the biggest takeaway from Eudora’s showing last week was the number of options this squad has on any given night. Four different players had a double-digit performance for the Cardinals in the three-day tournament.

In the opening round, Riley Hiebert (18) and Emma Durr (12) led the way offensively. Reagan Hiebert then scored 10 points against Piper in the semifinals, while Harper Schreiner tallied 17 points in the third-place game. Jayla Pierce also scored 13 points in the tournament.

Good luck trying to slow down all those weapons this season.