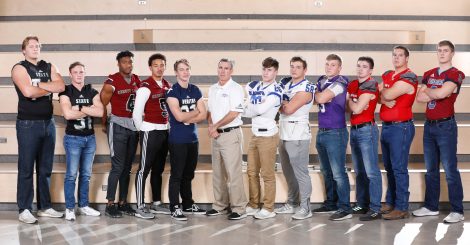 Under Paramore, Perry-Lecompton advanced to the state championship game for the second time in program history. The Kaws ultimately finished as a runner-up in Class 3A. PLHS finished with a 9-4 record, which included a stretch of six consecutive wins before the Kaws fell to unbeaten Andale in the title game.

Corcoran, a senior left tackle, was an integral part of Free State’s prolific rushing attack this season. In addition to being the top-ranked recruit in Kansas in the class of 2020, Corcoran will get the opportunity to compete in the All-American Bowl before he begins his college career at the University of Nebraska.

Cooper Cunningham, Tonganoxie — Cunningham’s senior season was also his first as the team’s top back. He ran for 2,124 yards in 10 games and scored 28 times. Cunningham ran for 200-plus yards in seven contests, earning a first-team selection by the Frontier League coaches.

Sloan Hayden, Eudora — In his lone season with the Cardinals, Hayden became a focal point of the game plan. Opposing teams recognized this and employed double coverage on the 6-foot-5, 230-pound tight end. Hayden, a Missouri State commit, still recorded 162 receiving yards and two scores. He finished with 28 tackles as well.

Chris McGee, Lawrence High — When Lawrence needed to throw, McGee was often the intended target. McGee’s sure hands kept a number of drives alive for the Lions. The talented senior receiver was the perfect complement to a potent rushing attack. That type of combination helped Lawrence post an 8-2 record after going 1-8 in 2018 during Steve Rampy’s first year at the helm.

Thad Metcalfe, Perry-Lecompton — Metcalfe’s performance on both sides of the ball was a big factor in the Kaws’ successful season. The junior ran for 1,241 yards and 12 scores on 215 carries to go along with 341 yards and five touchdowns on 26 catches. Metcalfe also recorded 62 tackles and five interceptions, earning first-team All-Big 7 honors as a running back and a defensive back.

Devin Neal, Lawrence High — Lawrence’s turnaround wouldn’t have been possible without Neal. The junior running back was the catalyst of the Lions’ offense, and he typically saved his best performances for the biggest games. In a 35-10 win over 6A runner-up Olathe North, for example, Neal scored four times for the Lions. He finished the year with a four-touchdown performance against Topeka High.

Connor Quick, Baldwin — Quick led the way in the Bulldogs’ first year under new coach David Bowen. The senior running back had 126 carries for 529 yards and one touchdown. Quick was also used in the passing game, netting 10 catches for 151 yards during an 0-9 campaign by the Bulldogs. Quick was named to the All-Frontier League second team in his final season.

Hayden Robb, Perry-Lecompton — Playing both ways, Robb was crucial to Perry-Lecompton’s run to the state title game. Robb recorded 75 solo tackles and 55 assisted stops as a linebacker. He also forced four fumbles and recovered two more. On the other side of the ball, Robb’s play as a lineman warranted a first-team selection by the league’s coaches.

Cole Sample, Tonganoxie — This two-way lineman helped the Chieftains claim their first 10-win season in program history. Sample, a 6-foot-3, 285-pound senior, played along the offensive and defensive line this year. He accumulated 50 tackles, 14 tackles for loss and three sacks. Sample also recovered two fumbles for THS, which ended up capturing a regional title in Class 4A.

Andrew Windheuser, Veritas — Windheuser, who has been a leader for the Eagles for a few years, had a strong senior season. As a running back, Windheuser finished with 1,227 yards and 12 scores on 251 carries. He also tallied 139 total tackles as a linebacker, netting six sacks and forcing two more fumbles for the Eagles.