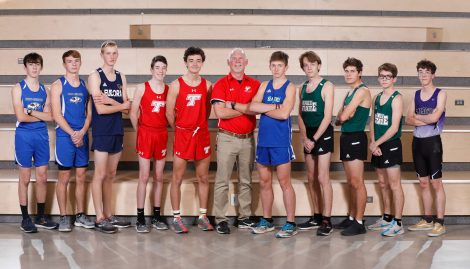 Under Tollefson, the Chieftains earned plenty of hardware during the postseason. Tonganoxie’s boys cross-country team won the Frontier League title and secured a regional crown as well. THS also ended up taking home a third-place finish at the Class 4A state cross-country meet.

To cap off his stellar career, Nelson won the individual state title at the Class 2A state cross-country meet. He earned medals at six meets this season and won four of those contests. Nelson, who was the captain of the cross-country squad, won the regional meet and state meet to end his final season in fitting fashion.

Hudson Allen, Baldwin — Allen earned some postseason recognition after a solid junior campaign, placing eighth at regionals and registering 35th at the Class 4A state meet. He ran his best time of 17:42 at the Frontier League meet, finishing 13th.

James Bartlett, Perry-Lecompton — To start his junior campaign, Bartlett finished fourth at Jefferson West for the Kaws. He then closed out the season with a runner-up finish at the Big 7 league meet and a 13th-place finish at regionals. Bartlett’s best mark, 17:51.88, was at the league meet.

Jake Edholm, Tonganoxie — The senior THS runner took home four top-10 finishes in the regular season, three of which were in the top five. Edholm also placed fourth at the Frontier League meet and third in regionals in the postseason.

Eli Gilmore, Tonganoxie — Even as a freshman, Gilmore was the team’s top runner in the biggest moments. He had five top-10 finishes in the regular season. Gilmore was a runner-up at both the league meet and the regional meet before placing fifth at state.

Charlie Johnson, Free State — Thanks to an individual league title by Johnson, Free State won the Sunflower League meet for the first time since 2014. Johnson was the first league champion for the FSHS boys in five years, as well. He also was a runner-up at regionals and placed fourth at the state meet.

Cody Loganbill, Eudora — Loganbill, a sophomore, was the team’s top runner for Eudora all season. Loganbill placed sixth at the Frontier League meet and notched fourth at the regional meet. He finished the year with a season-best time of 17:14 to take 29th at the Class 4A state meet.

Jack Ryan, Lawrence High — Ryan placed 10th at the 6A regional meet to qualify for the final event of the year, earning all-regional honors. He concluded his sophomore season placing 31st the 6A state cross-country meet with a time of 16:42.

Ethan Sharp, Free State — Sharp closed out his junior campaign with three top-10 finishes. He placed seventh at the Sunflower League meet to help the Firebirds win the team title. He also came in eighth at regionals and tallied 10th at the state meet.

Ben Shryock, Free State — Shryock ended his sophomore season with a pair of strong performances in the postseason. He recorded third at the league meet and finished fourth at regionals. Shryock also won the boys race at the Baldwin Invitational in the regular season.

Reece Sollars, Perry-Lecompton — Sollars kicked off the year with three top-10 finishes and continued to make strides down the stretch. Sollars ran a season-best time of 18:46.91 to take ninth at the Big 7 league meet. Sollars also came in 26th place overall at the regional meet.