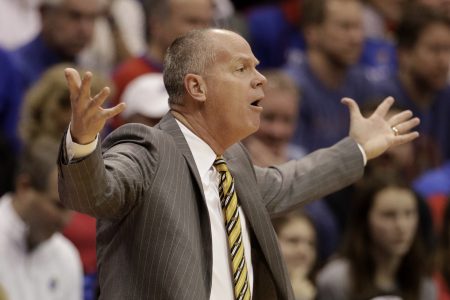 Although things did not go well for his team on the floor during Saturday’s 72-58 loss to No. 2 Kansas, Colorado coach Tad Boyle’s return to his alma mater was still something to remember.

“Having spent four of my formative years at KU, playing in Allen Fieldhouse, it is special, there’s no doubt,” Boyle said of his third trip (0-3) to Lawrence as CU’s head coach. “And what makes it special is the building and the fans and the tradition and everything that Kansas basketball is all about. It’s a special place. And I’m excited that our players (had) a chance to experience it and embrace the opportunity.”

Although Boyle, a native of Greeley, Colo., forever will hold his playing days in Lawrence, from 1981-85, fondly in his memory bank, the 10th-year CU coach said he did not have much time during this trip to visit any of his old haunts.

Outside of a game day walk around campus, Boyle was all business up to tipoff after arriving with the team late Friday night.

“The game against Kansas doesn’t count any more in the standings at the end of the year,” Boyle said. “Every game is the same. Now, doing it in Allen Fieldhouse, this has a lot of special things coming together all at once.”

Part of that was another opportunity to match up with KU coach Bill Self, for whom Boyle has a ton of respect and appreciation.

“I think just the consistency that his teams play with, both offensively and defensively,” he said when asked what impresses him most about Self. “And the soundness that they have. Year in and year out, they’re one of the most efficient offensive teams in America. They guard you. And they’re just consistent, game after game, year after year. And, as a coach, you realize that that doesn’t happen by accident. He’s not in the Hall of Fame for nothing.”

Former Kansas great Devonte’ Graham, who has been tearing up the NBA during his second season with the Charlotte Hornets, was in town for Saturday’s game.

Graham watched the KU victory from behind the Kansas bench and received a monster roar from the Allen Fieldhouse crowd when he was introduced during a timeout midway through the second half with Kansas leading 46-32.

Just for good measure, the KU public address announcer also introduced two members of the 2008 national championship team — Tyrel Reed and Brady Morningstar — but there’s little doubt that it was Graham the fans wanted to see.

They responded with a huge roar that drowned out the announcement of Graham’s name, and he responded with his signature smile that he flashed hundreds of times during his four-year Kansas career.

Class of 2022 point guard Tre White, Cornerstone Christian in San Antonio, announced Friday that he has reopened his recruitment.

A five-star prospect who just started his sophomore season of high school basketball, White orally committed to KU last summer and has long been a huge fan of the Kansas program and coaching staff.

According to his recent tweet, the 6-foot-6, 200-pound point guard is opening up his recruitment so he can experience the entire process, from beginning to end, in an effort to find “the college that best fits my academic and basketball needs” and “all the goals I have set in my life.”

Reached via text by the Journal-World on Friday evening, White said he “for sure” would keep Kansas in the mix as he moves through the various stages of his recruitment.

KU’s 2020 recruiting class now officially features the No. 1 juco recruit in the country.

Tyon Grant-Foster, a 6-foot-7, 187-pound guard from Indian Hills CC in Ottumwa, Iowa, has jumped into the top spot in the national junior college prospect ratings according to JucoRecruiting.com.

Grant-Foster, a native of Kansas City, Kan., who committed to Kansas in mid-October and signed with the Jayhawks during the early signing period in November, has been on fire so far this season.

Those averages include three games of 24 or more points, including a 35-point explosion against State Fair Community College in early November.

According to the website, the JucoRecruiting.com rankings will be updated four more times before next summer — Jan. 15, Feb. 15, April 1 and June 1.

Saturday’s victory marked KU’s 30th in a row over Colorado at Allen Fieldhouse, a streak that started in 1984… KU now leads the series with CU 124-40, including a 54-5 mark in games played inside Allen Fieldhouse… KU’s home-court winning streak now sits at 25 in a row, and the Jayhawks are 4-0 at home this season… The Jayhawks are now 7-1 or better for the sixth consecutive season and the 12th time in the 17-year Bill Self era… KU started the same lineup for the seventh time in eight games this season — Devon Dotson, Ochai Agbaji, Marcus Garrett, David McCormack and Udoka Azubuike.