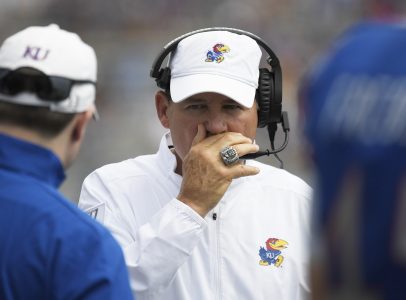 It wasn’t always pretty, but the Les Miles era got off on the right foot.

After surrendering a late lead, the Kansas football team got the last laugh by scoring on its final drive to secure a 24-17 win over Indiana State Saturday afternoon at the David Booth Kansas Memorial Stadium.

Redshirt senior quarterback Carter Stanley and senior receiver Daylon Charlot linked up for 22-yard touchdown connection with 2:20 left in the contest. The Jayhawks then converted on a two-point try via a double reverse pass from Andrew Parchment to Jack Luavasa.

The score and two-point trickery were both necessary after a fumble recovery gave the Sycamores a 17-16 lead with 4:24 left in the game. Yet, given the fact the Jayhawks lost twice to an FCS foe under the previous head coach, Saturday’s showing was at least a step in the right direction.

Stanley, who earned the start, played the entire game under center even though Miles hinted that he might shuffle his signal callers. Stanley went 20-for-29 through the air for 241 yards and two touchdowns.

The running game was a focal point of KU’s offense, even without sophomore running back Pooka Williams Jr. Senior Khalil Herbert had a 33-yard run on the team’s first offensive play of the game, finishing with 88 yards on 17 carries.

Kansas’ defense, which is replacing a ton of production along the front seven, made enough plays to contain Indiana State’s offense. Senior defensive end Darius Moragne was effective, recording a sack and a quarterback hurry to go along with his seven tackles on the day.

The performance was not completely mistake-free, of course. KU’s defense was called for a delay of game at one point in the first half. On a punt return, Hasan Defense was hit with an unsportsmanlike penalty that ruined one of Kansas’ drives before it even started.

Still, given the fact the Jayhawks haven’t won more than three games in a season since 2009, this program should appreciate any victory. The Les Miles era, unlike the David Beaty tenure before him, at least started off in the win column.

• The game turned when: While the game ultimately was close down the stretch, this sequence proved to be crucial in the second half.

Entering the season opener, much was rightfully made about the Sycamores’ ability to take care of the rock. In 2018, Indiana State ranked No. 1 in the FCS in fewest turnovers. ISU threw just three interceptions all season.

But the momentum swung in the second half when Indiana State quarterback Ryan Boyle threw his second interception of the afternoon. Trailing 10-3 after a sluggish first half by both squads, Indiana State appeared poised to score and put pressure on the Jayhawks in their first game in the Les Miles era.

With pressure on first down, Boyle fired a pass toward the end zone. Kansas senior safety Jeremiah McCullough picked the pass off to spoil a promising drive. The Jayhawks proceeded to march down the field and add to their lead.

• Offensive highlight: KU’s first offensive score of the 2019 season created some much-needed breathing room against a FCS foe. And it was done by an unlikely suspect.

It allowed Sosinski, who previously was a member of the Kansas men’s basketball team, to accomplish a rare feat. Sosinski has now both scored in a college football game as well as a NCAA Final Four game in the men’s basketball tournament.

The baddest man on the planet. pic.twitter.com/u99ve8UzX0

It served as the first offensive score under Miles, who has a history of using tight ends.

• Defensive highlight: One of KU’s biggest highlights came on the defensive end early in the first half. And, of course, it was made by the veteran Kansas secondary.

One more look at @Hasan13Defense living up to his name

It was a fitting outcome following a strong showing in the turnover department last season. In 2018, the Jayhawks were tied for the eighth-best mark in all of FBS in that category and led all Big 12 teams with 27 turnovers gained.

• Up next: Kansas will play host to Coastal Carolina at 6 p.m. Saturday.

(I think these are accurate)