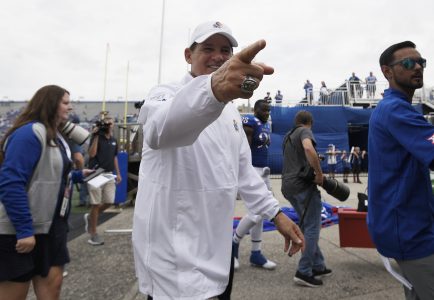 Kansas head coach Les Miles points to a fan as he walks off the field Saturday afternoon at David Booth Kansas Memorial Stadium on Aug. 31, 2019.

While running onto the field before a game for the first time as the head football coach at Kansas, Les Miles felt relatively calm about what was to come.

Sure, it had been close to three years since he coached a college football game, but Miles reported a steady heart rate for the minutes leading up to his debut with the Jayhawks.

Miles wouldn’t leave David Booth Kansas Memorial Stadium on Saturday without receiving a reminder of how nerve wracking the profession can be. Before quarterback Carter Stanley and the offense helped the Jayhawks rally for a 24-17 victory over Indiana State, Miles said after the game, knocking his fist rapidly on the podium in front of him to demonstrate, his heart was thumping.

“I think we’ll learn to win games like this without as much drama,” Miles said.

His first game as KU’s head coach, in front of an announced crowd of 32,611, ended in celebration instead of dismay after senior receiver Daylon Charlot secured the go-ahead touchdown in the north end zone on a 22-yard pass from Stanley, who materialized as KU’s starting QB and played every snap for the offense.

The outcome seemed far from certain when Sycamores defensive end Kaleb Brewer sacked Stanley with KU backed up against its own goal line, causing a fumble that fellow D-end Inoke Moala recovered for a touchdown that would put the Jayhawks in a 17-16 hole with 4:24 to play.

Stanley followed up a potentially crippling outcome by connecting on passes to junior Andrew Parchment and Charlot (four in total, for 68 yards), fueling an eight-play, 75-yard, must-have scoring drive that only took 2:04.

“That’s what they do,” Stanley said of Parchment (eight catches for 121 yards) and Charlot (six receptions, 79 yards). “It’s a very talented group. Coach Emmett Jones is a great leader for them. They came up big.”

Credited with two lost fumbles in the win, Stanley, the fifth-year senior, had some moments that disappointed him. But he finished with 241 passing yards and a pair of touchdowns, completing 20 of his 29 throws, with no interceptions.

Said Miles: “I thought our quarterback played hard and did the things we asked him to do — imperfectly but really played hard.”

After eight touchdown-less possessions, the FCS No. 16-ranked Sycamores (0-1) finally broke through in the fourth quarter, making sure the Jayhawks (1-0) wouldn’t get out of their season debut with a low-stress victory.

On 4th and 7 at KU’s 26-yard line, senior ISU quarterback Ryan Boyle hit Jones wide open down the middle for a TD, capping a 14-play drive.

It was a relatively rare failure for coordinator D.J. Eliot’s KU defense.

“Defensively for three quarters they had to play and make plays,” Miles said, “for the team with little support from the offense. Yet they did. They continued to make plays and make plays.”

The first offensive touchdown under Miles’ watch came on a play-action pass from Stanley to senior tight end James Sosinski. The former KU basketball walk-on made the second reception of his KU football career (the first came in the second quarter versus ISU) memorable, finding himself wide open at the 10-yard line and then beating a defender to the goal line.

The seven-play, 87-yard scoring drive easily surpassed KU’s previous five possessions, the longest of which went 55 yards, and pushed KU’s cushion to 16-3 with 8:40 left in the third quarter.

ISU scored its first points with one second to go in the first half. The Sycamores covered 60 yards in just 1:46, and nearly made KU’s lead feel more precarious.

Rontrez Morgan laid out to bring in a 21-yard reception that put ISU inside KU’s 10-yard line. On 3rd and goal, Boyle’s pass for Dante Jones II overshot his target, but KU senior safety Mike Lee was flagged for pass interference on the coverage, setting up an automatic first down and moving the ball to the 2-yard line.

KU senior nose tackle Jelani Brown provided a crucial stop on 1st down before Boyle and Hendrix came within a half shoe size of putting 6 points on the board. Ruled an incomplete pass on the field, Hendrix got one toe down on a would-be catch, just at the point of the end zone where the blue and white turf meet, in the back right corner. After review, the incomplete ruling stood and ISU settled for a 20-yard field goal from Jerry Nunez, who previously missed attempts from 51 and 45 yards out.

Even though KU jumped out in front of ISU on the scoreboard early, it wasn’t until the second quarter that the offense created any buzz or momentum for Miles’ debut. Stanley’s previous three passes had gone incomplete and a fourth overshot Stephon Robinson Jr. and could have landed on KU’s sideline had the 5-foot-10 junior not soared straight up to bring in a crowd-pleasing 14-yard reception.

KU pounced immediately after Robinson’s highlight grab by playing with some tempo and handing the ball to Herbert, who took off for for 21 more yards on the next play, and followed that one up with another 11 yards on the ground, getting KU in the red zone.

The drive stalled out from there, however, and KU could only add 3 points to its lead with a 36-yard field goal by junior Liam Jones, who had missed from 49 yards early in the first quarter.

The first major miscue for KU’s offense came in the opening minutes of the second quarter. Stanley looked to find Dom Williams in the backfield with a quick throw to the quarterback’s left, but the toss sailed on the fifth-year senior and Williams couldn’t extend high enough to reel it in. Once the ball hit the turf, ISU’s Michael Thomas snagged it.

Although the turnover gave the Sycamores decent field position, at their own 37, after picking up two first downs, a tackle and QB pressure on ensuing plays by senior defensive end Darrius Moragne kept ISU from capitalizing, as Nunez missed a field goal try.

Senior KU cornerback Hasan Defense said he and other defensive veterans wanted to be sure and get off to a strong start in the game.

“We know with a new offense, new coaching staff on offense, things weren’t going to be easy. We’re in college, so we don’t get preseason games to help our offense or anything else,” Defense said.

One such instance came in the third quarter, when senior safety Jeremiah McCullough picked off Boyle in the end zone, “a dagger,” Defense would call it.

The first came less than halfway through the first quarter, when a Boyle misfire toward the left sideline gift-wrapped KU cornerback Defense with not only an interception, but also a 57-yard path to the first touchdown of the Miles era and a 7-0 lead.

Defense said the video preparation he put in with assistant Chevis Jackson set him up to read the play perfectly.

According to Miles, there weren’t two more exciting plays in the game than the interceptions by Defense and McCullough.

“When you win games,” the coach said, “those plays are made by people who can not wait to be put in that position and have always thought that they would be the one that would make that play.”

The final statistics didn’t read like those of a team that played in the type of “dominating” fashion Miles has referenced leading up to the season. KU and ISU both finished with 20 first downs, ISU out-gained the home team 365-344 in total offensive yards and KU was penalized seven times for 49 yards. But Miles called it “a start.”

“It’s the start,” he went on. “It allows us to step to another opponent, play hard and recognize when we get to the back end of a game we can win.”

And that was the part of the at times heart-racing afternoon that left Miles upbeat.

“I think the most important thing that we can take from this is victory. It was a position that a team who didn’t have the experience in coming back in those games, you know, gave them the experience that they needed, which was to play very, very competitive in tight quarters.

KU plays host to Coastal Carolina next Saturday at 6 p.m.