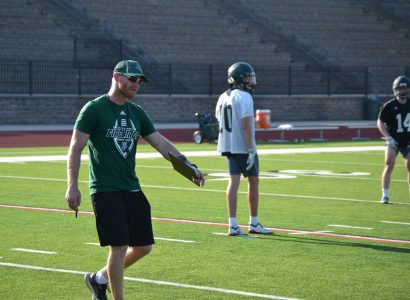 Not even the heat could spoil Kevin Stewart’s spirits on his first day.

Monday marked the beginning of a new era for the Free State football team with Stewart at the helm. However, due to the heat index, outdoor practices at FSHS did not begin until 5:30 p.m. on the first day of the new high school sports season.

FSHS was able to get to work for an hour on the gridiron. Stewart estimated that Free State had 95 players among sophomores, juniors and seniors on the first day.

“We got a good group of guys. Coaches are excited to be out here,” Stewart said. “I think we are going to have a good squad this year, so I’m excited.”

For the first time since the school was formed in 1997, Free State’s opening football practice was directed by someone other than Bob Lisher. The former FSHS head coach is now the offensive line coach for William Chrisman High School in Independence, Mo.

But many of the Free State players have become familiar with Stewart’s expectations for this program. After all, FSHS competed in multiple summer camps and participated in workouts throughout the offseason.

“I think we grew a lot over the summer. I think we had a lot of improvements from day one,” Stewart said. “But we still have a little bit of ways to go as far as the scheme goes. I really like our players. I think we have some good talent this year.”

With a little over two weeks away until the season opener against Olathe West, Stewart hopes his team can show progress in certain aspects of the game.

“Make sure we are ready to play week one in the kicking game and not turning the ball over,” Stewart said. “Make sure we are assignment sound and limit the big plays. I think if we can do those things, the players will take care of the rest.”

On the first day of tryouts for Free State volleyball, Savage estimated she had about 65 players. Savage, who is in her first season after being an assistant for nine years, will have to trim the roster down to 45 players in three days.

“I’m ecstatic. I’m ready to get things going,” Savage said. “We have been ready for a while, and we are very excited for our numbers this year.”

After finalizing a roster, the Firebirds will turn their attention to the 2019 season. Free State will host Olathe North and Shawnee Mission North for a triangular Sept. 10. It will be one of two home events for FSHS in September.

“I want to focus on the process,” Savage said. “I want them to get in the right mindset of buying into what we are trying to do here and just focusing on that process to lead us to our goals at the end of the season.”

Mohammed is going to have a difficult task of turning down players during his first year coaching Free State’s boys soccer program.

It was also Farrow’s first day as the head coach of both Lawrence High and Free State gymnastics teams, which practice together at LHS.

Most of the first practice was spent setting up the equipment, though it won’t be long before both teams are hitting the mats. Both squads are coming off top-five finishes at the state gymnastics meet last season, as the Lions were runner-ups and the Firebirds finished fifth.

Farrow is replacing Michelle Seidner, who previously coached both teams for two years.