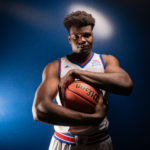 Monday’s news that junior center Udoka Azubuike planned to return to Kansas for his senior season was the best single bit of news the Jayhawks had received in quite a while.

Until then, most of the significant offseason, April news had been about guys leaving the program or choosing not to come altogether.

But Azubuike’s return stops that in its tracks and may very well wind up being the tipping point that sends the whole thing back in a more positive direction.

Commitments will follow. They have to. KU has at least three or four scholarships to hand out still — probably more — before they put a bow on the 2019 recruiting class. And while the commitments that lie ahead, whether they come in the next week or month, might not necessarily be the result of Azubuike’s decision to come back, his news certainly makes it easier for other guys to get on board.

With Azubuike, the Jayhawks are a top 10 team again. Many college basketball analysts had Kansas flirting with that designation for next season even without Azubuike’s future fully decided. But now that we know he’ll be back, most have sent KU flying up the rankings as they look ahead to the 2019-20 season that’s still a more than five months away.

National writer Jeff Goodman, of The Stadium, redid his early 2019-20 rankings on Tuesday morning and plugged Kansas into the No. 3 spot, behind Michigan State and Duke and just ahead of Gonzaga and Oregon.

“There are plenty of question marks here regarding whether Quentin Grimes, Devon Dotson and even Silvio De Sousa (pending an appeal) return,” Goodman wrote. “However, Bill Self got huge news when Udoka Azubuike decided to return for his senior campaign. Ochai Agbaji, Marcus Garrett, Mitch Lightfoot and David McCormack are also all back and my guess is the Jayhawks will add a couple more players whether it’s from the transfer wire or high school kids.”

With that in mind, let’s take a quick look at the three most important things about Azubuike’s decision to come back.

Sure it’s always fun to have a familiar face and high-level play stick around your school for another season. And, yeah, Dok’s decision means there are a whole bunch of dunks in KU’s future again.

But there are other, much more important benefits of this news, as well.

1 – Kansas has a game-changing player again

Even with Dedric Lawson being as good as he was and putting up the numbers he did during the 2018-19 season, the Jayhawks were missing that type of unstoppable force that others simply could not handle.

Udoka Azubuike is that. And everyone knows it.

Forget about his well-documented struggles at the free-throw line. There’s enough reason to believe that will get better — at least a little bit — and even if it doesn’t, Azubuike’s propensity for simply forcing other teams to foul — intentionally or otherwise — can put opponents in a tough spot.

Beyond that, Azubuike is the type of player who KU’s offensive players can throw the ball to whenever they’re in trouble.

Drive gets cut off and you’ve got nowhere to go? Toss it up to Azubuike and see if he can save the play.

Shot clock’s winding down and you haven’t been able to run anything that works? Force feed a pass to Udoka and see if he can bail out the bad possession.

Turn the corner and find an open path to the rim? Throw it high when the help defense comes and let Azubuike punish the rim and pump up the crowd.

All of that, and more, is now a regular part of game night again for the Jayhawks, who will benefit from the big man’s return in immeasurable ways during the next 11 months.

2 – The big man’s presence makes life easier for others

In the first factor listed above, we went over a few ways that Azubuike’s teammates could get him the ball and make themselves — and the team — look good even when things weren’t going well.

But there are so many other ways that Azubuike’s mere presence on the floor makes life easier for his teammates, as well.

By far the biggest is how the attention that teams have to pay to Azubuike down low can open up space and shots for his teammates on the perimeter.

No team took better advantage of that than the 2016-17 team that went to the Final Four and featured four elite shooters playing around the 7-foot Nigerian inside. And, no, the 2019-20 Kansas roster will not have the likes of Svi Mykhailiuk, Devonte’ Graham, Malik Newman and Lagerald Vick waiting to catch passes on the perimeter.

But Azubuike’s presence can give the players Kansas does have more time to get their shots off. And more time to shoot means better fundamentals, less stress and a higher percentage.

I can’t help but picture Devon Dotson in this scenario. Not exactly known as a great outside shooter — Dotson shot 36.3 percent (33 of 91) during his freshman season — Dotson’s percentage seemed to go up dramatically when he shot open 3-pointers and had time to set his feet, square his shoulders and release at the top of his jump.

He, along with Ochai Agbaji, Marcus Garrett, Christian Braun, Issac McBride and whatever other shooters Bill Self and company add to the roster in the coming weeks, should get a lot of shots where they can do just that next season.

Finally, more of a non-basketball benefit of Azubuike’s decision comes in the form of stability in the program.

And I’m not talking about Self and company knowing they have an anchor inside when they’re making up their lineups or brainstorming how they want to play.

It’s no secret that the cloud surrounding the Kansas basketball program from the federal investigation into corruption in college basketball has had an affect on KU’s recruiting. Furthermore, the rumors of KU coach Bill Self leaving — which he squashed multiple times in the past few weeks — also have brought uncertainty to the program.

While concerns about the future or what’s ahead might not have been the primary reason for some of KU’s top targets picking other programs, there’s little doubt that they played a role in one way or another.

This could and should put an end to all of that.

Yet, there they are; Azubuike already fully back in the fold and De Sousa promising to return if he wins his appeal with the NCAA.

That’s good news for Kansas, both in terms of the potential gains of having those two players in the lineup — I still can’t quite get over how dominant having those two out there could be — and the message it sends all other players who are considering signing with the program.