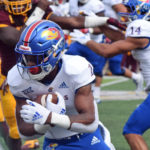 Hahnville, about 25 miles upriver from New Orleans, is in the region of Louisiana known as the River Parishes.

Early in the 20th century, it was famous for being the 1891 birthplace of jazz trumpeter Thomas “Papa Mutt” Carey.

Later in the century, it became known as a high school football powerhouse, a designation that still fits. As recently as 2014, Hahnville High had four graduates playing in the NFL at the same time: Alfred Blue, LaRon Byrd, Dawan Landry and LaRon Landry.

It takes a lot to impress fans of a football program with that much success, especially in a state that, in more seasons than not, leads the nation in per-capita NFL players.

“One of the better programs in the state,” Jerry Neal, a split end and defensive back for the Tigers in the early ’70s, said by phone. “Hahnville’s had some big players. Then, here comes this little, bitty guy in the 10th grade. We all watched in disbelief from that point on.”

Three years of watching Pooka Williams and still the question asked by so many in the stands, according to Neal: “How did that just happen?”

Williams averaged 8.9 yards on his 14 carries Saturday in Kansas’ 31-7 victory at Central Michigan, turned a draw play into a 20-yard touchdown and sprinted down the left sideline for a 41-yard TD.

If you’re still on the fence about whether to head out to David Booth Kansas Memorial Stadium for an 11 a.m. kickoff Saturday vs. Rutgers, don’t take my word for it. Heed the words of someone who has witnessed a ton of Williams highlights live.

“Watching Pooka was like watching film where he’s the only person in fast motion,” Neal said, hours after catching a few catfish on Lake Verret, where he said it’s no longer advisable to swim near shore because “gators cruise up and down the bank. The lake’s inundated with them.”

Neal then proceeded to instruct how to trap alligators: Bait a giant hook with beef melt (the cow’s spleen) that has been sitting in the sun to make the foul smell more powerful and therefore more enticing to the gator, attach the hook to a rope that’s clipped to a cypress tree branch with a clothespin, watch the gator jump out of the water and swallow the hook, and wrestle the gator into position to “shoot it between the eyes with a .22. It’s not rocket science.”

Gonzales, as is Hahnville, is located in the River Parish area, a stretch of towns along both banks of the Mississippi River from Baton Rouge to New Orleans. (In Louisiana, counties are called parishes).

“The high school football scene is pretty intense along that river, a lot of rivalries on either side of the river,” Neal said.

He is retired after working 35 years for CF Industries at an industrial plant.

“Largest fertilizer manufacturer in the Western hemisphere,” Neal said with pride. “The fertilizer that the farmers up there in Kansas are using, that’s where it’s manufactured.”

Kansas associate head coach Tony Hull is trying to make the Louisiana-to-Kansas path a common one for more than just fertilizer.

Hull is from New Orleans and nobody has to tell him that high school football means a great deal to an awful lot of people in Louisiana.

“River Parish football fans are nuts,” Neal said. “When they have a booster club meeting, it’s really well attended and everybody brings something to eat. They’ll have a half and half, not just at the game, but at booster club meetings, too. Big pots. It’s quite a scene. They’ll get coaches from the colleges to come in and talk.”

Happily, no doubt, because it’s such fertile recruiting soil.

Neal felt the need to almost apologize for his enthusiasm when talking about his favorite football player.

“I can go on and on about Pooka, simply because I’ve never seen anyone quite like that,” Neal said. “Super confident, super tough, super competitive, and then, couple that with being blessed with impeccable vision. It’s almost like he knows what the defense is going to do before they do it. He makes these little cuts and accelerates like a funny car and he’s gone. Gone! We couldn’t believe what we were seeing and he was doing it against top-notch schools with a bunch of Division I recruits.”

Once Neal started talking about Pooka, he couldn’t stop. He talked about big play after big play in big spots in last year’s playoffs, which ended with Hahnville losing in the 5A (highest division) title game.

“He’s small, but he’s like an all-muscle superhuman,” Neal said. “When I saw those two runs for Kansas, I was like, man, this looks just like he looked in high school. And he’s a great receiver too. Wait until they get him out in space. You can’t tackle what you can’t touch.”

And you can’t join in the conversation Monday in the office about what it felt like in the stadium watching Pooka run against Rutgers unless you’re there to watch it. Neal used to routinely make the 45-minute drive to see him and said he never regretted it.