“That third set was obviously key,” head coach Ray Bechard said in a team release. “You have to go into extra points and we made some very aggressive plays both offensively and defensively. That carried over into the fourth set. Our set distribution was heavy to Jada (Burse) and Ashley (Smith) but Gabby (Simpson) was a weapon tonight too.” 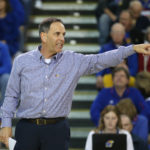