Tom Keegan: Jayhawks rewarded by sticking with Bender at QB 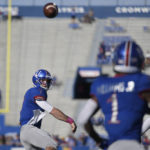 If he had it to do over again, Kansas senior quarterback Peyton Bender would have thrown his intentional-safety pass with his back to the field higher so that time would have elapsed, instead of leaving one long second on the game clock.

How long was that last second? Game 3 of the World Series long.

One bad kick later, the final second could have cost Kansas the game if a TCU player had fielded it on one knee to preserve the final second and leave the Horned Frogs with a 50-yard attempt for a game-winning field goal.

No telling how empty head coach David Beaty’s desk would be by now had that happened and TCU won the game with a field goal.

The students still would have poured onto the field, but it would have been to chase the coach, not to celebrate a 27-26 upset victory versus visiting TCU, Beaty’s second Big 12 win in his 32nd try.

Just 15,069 were in attendance to see Beaty’s finest three-plus hours since KU upset Texas in 2016.

Beaty had a big hand in Saturday’s victory by sticking with Bender, a quarterback nearly everyone still tuned into Kansas football had grown weary of watching. Not only that, Beaty designed and called plays that freed Pooka Williams in such an effective way that it appears that the head coach just might have improved the team by firing offensive coordinator Doug Meacham and appointing himself in his place.

Wow, never thought I could have seen myself writing that sentence.

Why in the world would he take over the offense from Meacham, and why did the head coach stick so long with Bender? The answer, of course, could be found on the scoreboard and in the updated standings, which showed Kansas moving from sole possession of last place and into a three-way tie for last with a chance for it to be a four-way tie if Oklahoma State couldn’t hold onto its early lead versus Texas.

The practice quarterback Beaty always has talked about showed up on game day. Bender emerged from the locker room after a so-so first half and threw accurate long balls, scrambled to create a touchdown pass and put his body at risk for a blasting with a huge third-down run.

This is the same quarterback who a week ago at Texas Tech played such a lousy first half that a stricter head coach might have had him spend the rest of his day, maybe even his career, running stadium steps.

Beaty not only didn’t do that, he let him play the second half, which went better for Bender but still won’t ever make its way onto any instructional videos. Plus, he started him Saturday.

Bender responded with a second half in which he completed 11 of 17 passes for 182 yards and two touchdowns, both to Pooka Williams (seven catches for 102 yards). Kansas won the second half, 20-16. Bender didn’t fumble or throw a pick all day. He played with visible confidence.

“It’s nice in a way to know in the back of your head they’re going to be sticking with you so it’s not pressure on every throw,” Bender said. “I think it definitely has helped. … It allows you to get in a rhythm, settle in and execute the offense how it’s supposed to be run.”

He added that the use of slants and quick outs “slowed down the pass rush.”

That in turn gave him time to display his accuracy on long balls, including a perfect throw to Jeremiah Booker for a 34-yard gain.

“One of the things that I saw Peyton do so well today is he threw the deep ball really, really well,” said Beaty, who later added, “He’s one of the most accurate guys I’ve ever been around in practice, and I know it’s going to translate over to the game at some point. I think his confidence continues to grow.”

So does the stash in Beaty’s wallet. For coaching Kansas to a victory versus a Power Five school, Beaty earned a $100,000 bonus, giving him $250,000 in incentives for the season, which means that even if he doesn’t get another victory, he’ll be paid $1.85 million.

If Beaty does win another one, it will give him four on the season, the most in the post-Mark Mangino era. His overall KU record stands at 6-38 (compared to 5-19 for Turner Gill and 6-22 for Charlie Weis).

If NCAA rules didn’t forbid coaches from doing so, Beaty gladly would have given a portion of the six-figure bonus he earned Saturday to his quarterback, a portion to Pooka.

Two third-down plays Bender made, with his feet of all things, stood out for his head coach/offensive coordinator/quarterbacks coach.

On third and goal from the 7, on KU’s first second-half possession, Bender scrambled right, extending the play, looking for something and initially finding nothing. Then Pooka popped open, moving right and cutting across the front of the end zone. Bender hit him for the touchdown, giving Kansas a 14-10 lead.

Beaty called it “as good a play as I’ve seen him make since he’s been here.”

Midway through the fourth quarter, on third and 11 from the TCU 40, Bender saw no humans open but did see open grass and took off up the middle as a pair of defenders on either side of him sprinted toward the middle of the field.

If safety were Bender’s first concern, he would have slid and come up short of the first-down stick. Instead, he got rocked and made the first down with a 12-yard gain. That kept alive a drive that ended with Bender hitting Pooka over the middle and watching him bust a crazy move that freed him to take it in for a 28-yard touchdown.

“Knowing what he was staring down the barrel of and just knowing that he knew he had to get it done and go get that first down, I couldn’t be more proud of a kid,” Beaty said of Bender’s third-down run. “He’s a guy who’s taken a lot of criticism along the way, and there’s a reason why we stick with him. We believe in him. We know he’s got some real ability.”

Hooting and hollering aren’t among his abilities. His vibe is more Dead Head than Metal Head, so he wasn’t the one generating the noise in the celebratory locker room. How much jumping around did he do?

“Not a ton,” Bender said. “I watched a lot of it. I just went up to a lot of my teammates and told them I was proud of them, told them enjoy this one, but we have to get ready for Iowa State.”

That all-chill, no-shrill vibe works well for Bender in absorbing the hits he takes from Big 12 behemoths and cyberspace cynics.

“Playing quarterback, you get a lot of the love when it’s going good and you get a lot of the hate when things are going bad,” Bender said. “It’s just something as a player you can’t pay attention to it. We know what’s going on in this facility. We come up here every week and work, go to practice, and at the end of the day, people are going to say mean things, people are going to say good things. So I just try not to pay attention to it. That’s what I do.”

What he did Saturday was play a terrific second half — one that fell one second shy of perfection.