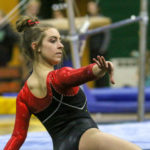 OVERLAND PARK – After four years in high school, Lawrence High senior Josie Hickerson hadn’t flipped a Yurchenko Pike onto a hard surface since she was in eighth grade.

And after she landed it for the last performance of her high school career, Hickerson was surrounded with several people trying to congratulate her on Saturday at Shawnee Mission South High School.

“That vault was so emotional to me,” Hickerson said. “I am so glad I got to end my gymnastics season with that. … I can barely walk, my legs are shaking.”

The highly difficult Yurchenko Pike consists of a roundoff back handspring onto the vault, and a pike off the vault. When she landed it on her second run, Hickerson scored a near-perfect 9.600 with teammate Paris Spotted Tail scoring almost the same two runs later with a 9.550.

Hickerson, Spotted Tail, and Ilaria Nichelatti each flipped their vaults for the first time all season at the 2018 state gymnastics meet. The next highest score to Hickerson and Spotted Tail’s vaults on the day was Olathe East’s Liz Wasinger’s 9.350 in beam. 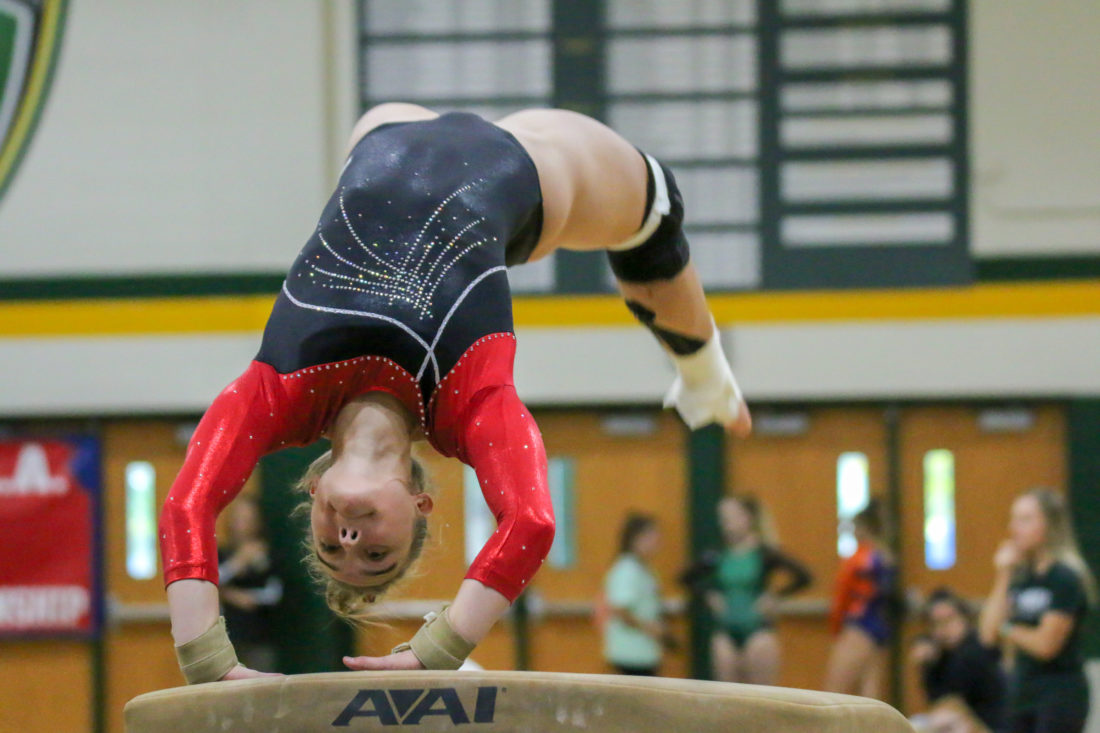 “I am so proud of these girls, we’ve worked so hard and we definitely wouldn’t have gotten second this year without the hard work and talent on this team,” Hickerson said.

When asked after the meet of how proud she was of her team, coach Michelle Seidner could only shed tears.

“They all did so great,” Seidner said. “They each have met most of their goals, if not all. I am super proud of both teams. They just did phenomenal today.” 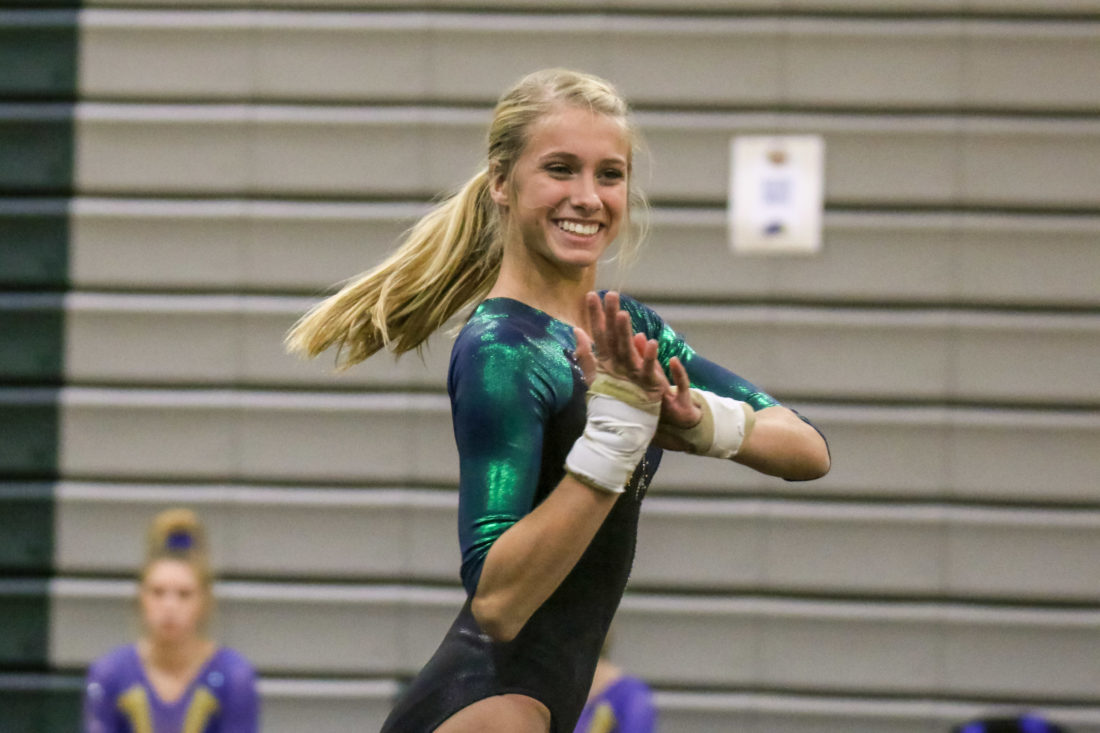 Starting out the day with lower scores in the beams and bars than they were expecting, Seidner said the Lions felt a little deflated. Still, LHS overcame that adversity and posted 27.100 in its floor routines. Though it was the second highest score in any event on the day, they needed to outscore Olathe East’s floor routine by more than 2.625 points.

“We wanted first bad, we wanted first real bad,” Seidner said. “I think we all knew we weren’t quite there after our bars and our beam scores. We gave them a pep talk right before vault and said ‘you know what, it is what it is, let’s throw whatever we’ve got at them.'” 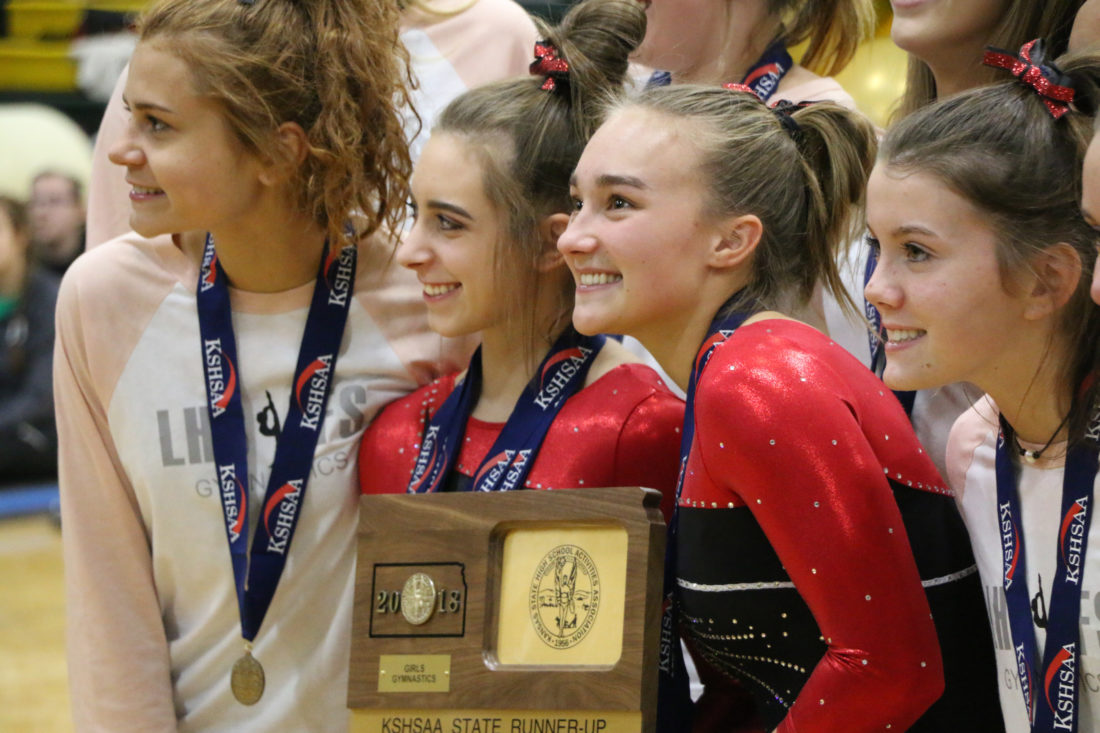 Lawrence seniors pose for a photo with the plaque at the state gymnastics meet on Saturday, October 20 at Shawnee Mission South.

Free State sophomore Talia Gay won the all-around at the state tournament. The next six on the podium were either from Olathe East or Lawrence. Hickerson and Eden Kingery each medaled.

Gay placed first in the bars as well, medaling third place in both vault and floor.

“Our team has definitely improved since last year,” Gay said. “We’ve got a lot of new teammates this year, a lot of new incoming freshman and we did really well.” 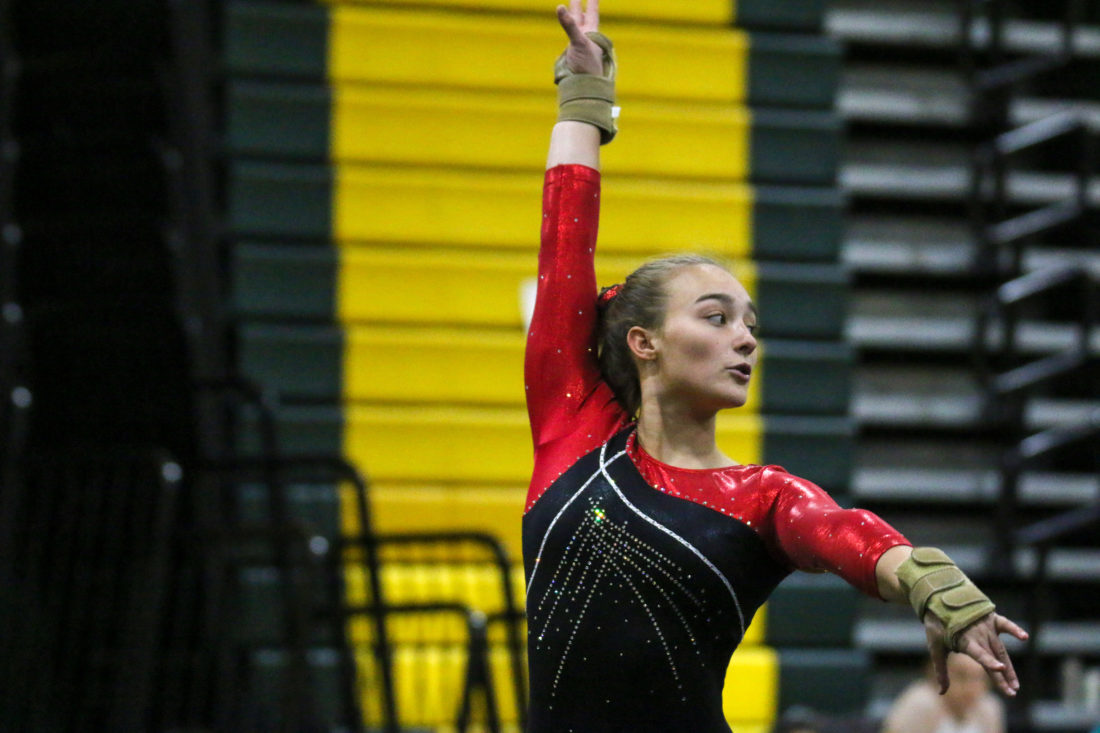 The Firebirds state lineup consisted of all underclassmen. Chaney Finkeldei posted a score above 30 in the all-around, while Tori Crockett finished in the top 25 of the all-around with strong performances. Ashley Mai, Savanna Dey, Ashley Mai, Avery Qualseth and Zakaya Dorsey each placed in an event for the Firebirds.

As a result, the Firebirds were just as excited for the Lions finish at state.

“Even though we are two separate teams, both these teams are like family with each other,” Seidner said. “They feel like one even though they’re separate, so the excitement for one is the same as the other. They don’t consider themselves separate.”