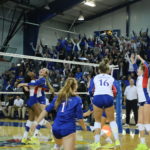 Burse led Kansas in kills (374), kills per set (3.46) and points (408.5). The junior also finished the regular season ranked eighth in the conference in points scored and sixth in kills per set.

“Jada (Burse) has taken over matches for us with her attack and her physicality has led to her scoring points through blocks,” head coach Ray Bechard said in a team release. “There are times were she has been very dominate and carried us offensively.”

Simpson earned second team honors in her lone season playing at KU. She led the Jayhawks in assists (558) despite a transition to the primary setter role halfway through the season. The senior also finished third on the team in digs (208) and fourth in kills (152), while logging the team’s lone triple-double against K-State on Nov. 14.

“I think teams and the other coaches in the Big 12 see Gabby’s (Simpson) value in that she is willing to contribute whatever is needed,” Bechard stated. “She has had big kills, has taken over the setting role, is a primary passer and is a six-rotation player for us.”

Smith earned her first postseason accolades, as she finished second on the team in kills (321) and kills per set (2.94), while earning the third-highest attack percentage (.242) to earn second-team honors. Langs, meanwhile, led the team in blocks per set (1.36), finishing tied for second en route to being named the rookie team.