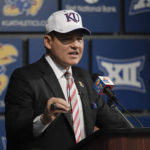 A funny thing happened on the way to hiring Les Miles.

The outgoing Kansas football staff left him just one committed player in the 2019 class. And it might have been the best thing that ever could have happened.

Sure, in a perfect world, you’d like to have a much more complete recruiting class by the time the early signing period rolls around in mid-December. But it’s been ages since the KU football world was perfect, and this odd hiccup — one that would’ve hindered David Beaty, but might help Miles — actually could end up benefiting Kansas.

This is not a full-on indictment of Beaty and the job he did. Yes, Beaty’s record was abysmal, but he did bring in some talented players. Not enough of them and not always through the best channels for long-term development and sustainability. But the roster has talent. Even Miles said as much, calling the Jayhawks “a recruiting class or two away from being a very special football team.”

Miles’ words were probably superfluous. After all, he likely would not have taken the job if Kansas didn’t have something to offer in the way of talent.

And now, Miles gets to add to it.

Conventional wisdom in college football recruiting says that if half of any given recruiting class winds up panning out, you’ve done well.

The same standard will apply to Miles, who said he anticipated adding a group of 15 players in the 2019 recruiting class.

That’s 10 shy of the NCAA maximum 25 allowed per signing class, and Beaty’s propensity for blueshirting players and counting them forward to a future class, thus cutting into the 25 allowed in the next class, is the reason for the shortage.

When Beaty was hired in December 2014, KU already had seven commitments and he added 18 more to the 2015 class.

When Charlie Weis was hired in December 2011, Turner Gill’s staff had secured just three commitments, but because KU’s 2012 class was limited to 21 players, Weis also went out and added 18 players.

From a pure numbers standpoint, 15 and 18 aren’t that far apart.

If you look at it that way, Miles really isn’t starting that far behind.

It’s true that Miles has fewer days to put together his first collection of talent, but don’t think for a second that the calendar will limit the talent pool he pulls from. Kansas Athletic Director Jeff Long made that clear on Sunday.

“Maybe there are some football (prospects) who weren’t necessarily looking at our program, but they’re aware of our program through basketball, but now they know we have a national championship coach on our football team and they will take a closer look at the University of Kansas,” Long said. “That’s really the important piece about this. It’s the brand of the KU Jayhawks, and we’re hoping people will sit up and take notice and those who have maybe made soft commitments elsewhere, if coach Miles is interested in them, that maybe they will turn and take a closer look at what we have to offer.”

No one knows better than Miles what he’s looking for in a player, both at a specific position and philosophically, so it’s an advantage that the 15 players he adds to this roster will all be players made in his mold.

It remains to be seen what that will mean at Kansas. But at LSU, it centered on traits like toughness, speed, athleticism and passion.

Regardless of whether those qualities remain important or others are added to the list, it seemed crystal clear on Sunday that even though he’s been out of the coaching game for two seasons, Miles has not lost sight of what he values in a football player.

Shortly after his introductory news conference, during a brief individual sit-down with the Journal-World, Miles shared a glimpse of what Saturdays had been like these past 26 months since being relieved of his duties at LSU in September 2016.

“We would put on a TV in five different spots and five different games and go from couch to pool to garage, just to watch and stay in touch,” he said.

Miles has been watching. And now he gets the opportunity to bring some of that talent to life.