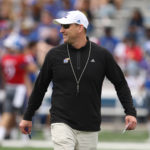 Kansas head coach David Beaty smiles as he walks across the field during the 2017 Spring Game on Saturday, April 15 at Memorial Stadium.

Some coaches in their final year on the job enjoy farewell tours that come with gifts and adoration from longtime foes in once-hostile venues.

Former Missouri basketball coach Norm Stewart’s final farewell at Kansas is one that comes to mind, and Norm, who for decades had been urged over and over by KU fans to simply sit down, finally did just that, in a rocking chair given to him by then-KU coach Roy Williams during a special ceremony at Allen Fieldhouse in 2003.

There have been dozens of other gracious goodbyes just like that, in all sports and at all levels.

But Kansas football coach David Beaty is getting no such treatment.

Maybe the coaches Beaty has gone to battle with during the past four years have had some kind things to say or encouraging words in their postgame handshakes or via text messages during the past couple of weeks. But it’s been nothing like what Stewart received. Heck, even longtime KU broadcaster Bob Davis got his own farewell tour. But both Davis and Stormin’ Norman had earned their feel-good exits.

Beaty, the football coach, has not. All he and his 6-41 record at Kansas get is a few weeks to talk about how he feels about moving on, what he’ll do next and what he’ll both remember and miss most about his time at KU.

And Beaty has handled it all with extraordinary dignity.

Beaty had an out. He could have walked away with three games left in the season and still received the $3 million buyout — give or take a couple hundred thousand — and nobody would have blamed him for doing that. In fact, many probably would have celebrated it.

Now, as KU begins the transition to new coach Les Miles and Beaty tries to keep his focus on preparing a game plan for contests that hardly matter, the toughest part of his job has been keeping it together.

Beaty wanted to finish out the season because he felt he owed it to the seniors and wanted to honor them for all of the tears of heartache and fits of frustration they endured together.

The most comfortable place to do that is on the field, on game day, where Beaty is merely another football coach trying to make the right call in the moment.

It’s before and after that when the noise gets loudest. Beaty has shown on more than one occasion he’s not above getting choked up about his new reality, even if he’d rather not think or talk about any of it.

I asked Beaty last Tuesday if he had let his mind go to what he would miss or what he won’t get to do at KU.

Remember, Beaty, like all new hires, had big plans and a grand vision for what Kansas football would become under his direction. The program fell woefully short of what that vision held, but Beaty is honoring it, himself and his players on his way out.

Talking about what your replacement will have to do to succeed or fielding questions about what makes KU a good job can’t be easy for the man who’s about to give up the head coach’s office.

But Beaty has remained positive and appreciative to the bitter end, without showing so much as a hint of bitterness. We now know the price of love and loyalty. And good for Beaty for being willing to pay it.

Tuesday, he even made a joke about the idea of never getting to work in the still-under-construction indoor facility that he worked so hard to help bring to campus.

“(But that facility is) going to make this place even better. It’s going to give (KU) the opportunity to draw top-flight players, and that’s really all I care (about), that this place continues to go up. Because there was a lot of work that was done here and, hopefully some, if not all, of it was appreciated. But it doesn’t matter if it is or not. What matters is what happens with KU moving forward.”

No matter what takes place in the season finale against Texas on Friday, KU’s record under Beaty will forever be an eyesore. And it’s that record, among many other shortcomings, that sealed his fate.

But 20 years from now, when Beaty looks back on his time at Kansas, he expects to do so fondly and hopes that aspects beyond football will be a part of his legacy.

“I think what will mean the most to us is the men and what they turn out to be,” he said. “They’ve faced a lot of adversity, and for them to be as resilient as they are, I think those are traits that great leaders possess and people that do great things, they possess that. I think that’s where I’ll look back and go, ‘Hey, man, I think we made a difference there.'”