Matt Tait: Kansas dabbling with stronger crop of coaching candidates this time around 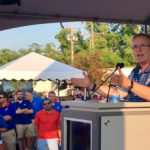 Let’s assume for a minute that Les Miles is not going to be the next football coach at the University of Kansas.

While the smoke continues to signal that Miles really could be the future football coach of the KU program, the possibility remains that it could be somebody else.

I’m more in Camp Miles today than I have been at any point in the past couple of weeks. But until a contract is signed and he’s introduced by KU Athletic Director Jeff Long, you just never know what could happen.

OK, so, back to the beginning. Let’s assume again that things fall through with Miles — or never were going to happen — and KU elects to hire someone else. While that might be a bit of a doomsday outcome at this point given the excitement, hope and expectations surrounding Miles, do you realize how much better off KU is this time around than in any of its previous searches?

Wait. Don’t answer that. Of course, you do. I have been paying attention. But it’s still worth pointing out.

Not since Jim Harbaugh was on the brink of accepting the job back in 2009 — yeah, I really think that almost happened — has KU been this close to having a big-time head coach with a proven track record on board.

And again, that’s without Miles being the answer.

I’m not talking about coaches who KU kicked the tires on or guys who considered the opening for 24 hours before saying “Thanks, but no thanks.” I’m talking about final stages, serious consideration, could have hired any one of them.

Todd Graham, Sonny Dykes, Dave Doeren, Greg Schiano and a few other proven head coaches jump off the page of KU’s list of potential candidates this time around.

As with any good coaching search, there are probably a couple of names in the mix that we haven’t heard much about and that should absolutely be the case.

But you can bet those unknowns are in the same category as Miles and the names mentioned above.

And while name alone does not mean anything, it does signal that KU is in a much better position than it was when it hired David Beaty in 2014.

At that time, the finalists for the open coaching job were Beaty, Clint Bowen, Ed Warinner and Tim Beck. I’m a fan of all four guys for different reasons, but that group combined doesn’t have the kind of coaching panache, nor the accomplishments, of the names in the mix this time around.

A lot of factors existed for why that group made up the list of finalists the last time around, with salary limitations being chief among them. Beaty, you surely recall, was hired for $800,000 annually. No one in that group would have made more than $1.2 million in his first year.

The names were good, but did not feature the same kind of top-to-bottom, quality track record that this search seems to have.

That should bode well for Kansas, no matter what direction Long decides or is forced to go.

If you ask me, and I found a $50 bill on the ground with a note attached to it that said, “Must be used to bet on KU’s coaching hire,” I’d throw that 50 bucks on Miles.

And I wouldn’t be surprised for a second if some of these newer names you’re hearing are being talked to as potential members of Miles’ staff. Remember, Long himself said his preference would be to hire someone with significant head coaching experience.

We might still be a long way from that point. And, hey, we might not. But things happen fast. And even though there has been no official update to Long’s timetable, you can bet that he’d like to get this thing done ASAP so the transition can begin.

If it doesn’t end soon, then what was the point of firing Beaty when he did?