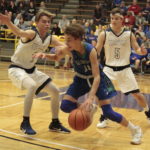 Bishop Seabury freshman Zach Bloch tries to dribble past Veritas Christian junior Quinton Donohoe (2) and Jackson Rau (5) in the first half of the Seahawks' 55-52 loss to the Eagles on Friday at Haskell's Coffin Sports Complex.

Despite losing its final game of 2018, the Bishop Seabury boys basketball team appears to be coming into form.

The Seahawks suffered their first loss of the season on Saturday, dropping a 59-48 decision to Grandview Christian in the championship game of the Grandview Christian tournament. Still, Bishop Seabury coach Jonathan Raney has plenty to like about his team’s 5-1 start.

“Extremely proud of the competitive spirit,” Raney said. “Guys played very hard and left it all out on the floor. Our bench was awesome and kept the energy and encouragement up. Was a good weekend overall and I know we improved.”

Stavian Jones was named to the all-tournament team, as he scored five points during the loss in the championship game. Zach Bloch was also one of the better players to take the floor in the tournament, scoring 16 points in the final contest of the weekend.

The Seahawks played their best in the second half on the offensive end, recording 17 points in the third period and 18 points in the final quarter.

“They were a talented, well-coached team,” Raney said. “I don’t think we played our best game by any means, but give them credit. They pressured us into some turnovers and shots we had been making just weren’t falling.”

Veritas cruised to a 76-46 victory over Manhattan CHIEF on Saturday afternoon.

Four players scored in double figures, as Trey Huslig led the team with 18 points on 7-of-8 shooting. Scott Weinhold added 15 points on a 5-for-7 effort, while Tucker Flory and Will Rau each finished with 13 points.

The Free State wrestling team continued its strong start to the season by winning the Emporia Invitational on Saturday.

FSHS scored 202 points to take first place out of 13 teams. Junction City and Emporia each finished in the top three with 171 and 170 points, respectively. Lawrence High, meanwhile, scored 47 points to place ninth.

The Firebirds, who are ranked No. 9 in Class 6A, had three athletes finish first in their respective weight class and four more wrestlers claim second. Lou Fincher finished first in the 126-pound weight class by winning the championship match via an injury default.

Elijah Jacobs, who netted first in the 145-pound weight class, won by a major decision over Topeka High’s Matthew Cutshall in the championship match. Devin Beers beat Vince Vehige of THS with a pin in the first-place match of the 182-pound weight class.

LHS will play host to Eudora at 6:30 p.m. Tuesday. Free State will be back in action after winter break.

A pair of athletes were selected to participate in the Shrine Bowl.

Free State receiver Keenan Garber and Perry-Lecompton’s Dalton Kellum were the only two area athletes to be tabbed to compete in the event. Both players were go-to options for their respective offenses all season.

The Kansas Shrine Bowl will take place for the 46th time in 2019 at Memorial Stadium in Dodge City.

A trio of Perry-Lecompton athletes signed letters of intent this past week to Baker University.

Blaine Pattin signed to play baseball at the collegiate level. Pattin is the grandson of the late Marty Pattin, who was a former pitcher for the Royals and baseball coach at Kansas. Haley Kellum and Talisa Stone signed to run track for the Wildcats.